Symptoms of urinary incontinence in dogs 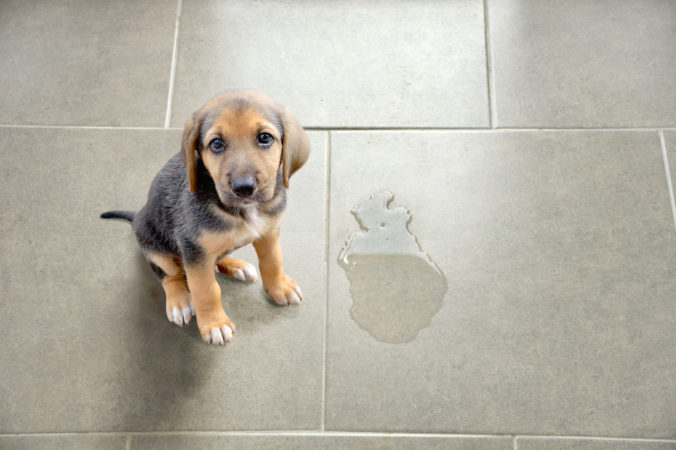 Symptoms of urinary incontinence in dogs

When there is evidence that our dog can not control his urge to urinate, it is possible that we are facing a picture of urinary incontinence. There are some common symptoms that can help us show that the dog is suffering from this alteration, caused by major causes.
Urinary incontinence manifests itself in an involuntary drip of urination (urine). This problem occurs mostly in castrated dogs, due to the decrease in secreted hormones. A study conducted by the Royal Veterinary College showed that 1% is the general trend of urinary incontinence in males, while in females it is 3%.
Among other causes, it may be due to damage to the pudendal nerve, polydipsia, polyuria, kidney and bladder diseases, bladder stones, congenital birth defects or cognitive dysfunction due to aging. To treat this type of discomfort, it is necessary to identify the major disease that originates it.
In some cases, after the dog has become accustomed to relieve themselves outside the home, they manifest urinary incontinence if their outings are prolonged or their habits change abruptly. Due to the prolonged time of urine retention, some organ of the urinary excretory system is weakened; In more complex cases, they can develop tumors.
The dog breeds most likely to suffer from urinary incontinence are the Setter, the Boxer, the Bullmastiff, the Fox Terrier and the Bulldog.

¿What are the symptoms?

The involuntary dribbling of the urine usually manifests when the dog is asleep or at rest. In some cases it manifests itself, too, when jumping, walking or running.
Wet spots in their resting place.
Inflammation and redness of the skin around the genitals.
Area of ​​the vulva or the penis always wet.
He constantly licks his genital area.
If your dog comes to urinate in a place where it is not allowed, you should avoid punishing him because this will not solve the problem. First, you should take it to the vet to find the reason and then habituate the exits according to their condition. Cleaning the home with enzymatic products helps the adaptation process at home.
When you realize that your dog has changed his habits and that these symptoms extend to more than two days, you should take him urgently to the vet.
Young male dogs do not tend to urinary incontinence so if they develop these symptoms should be evaluated by the veterinarian to rule out a urethral disease of the prostate and bladder.
On the other hand, young dogs under one year that manifest these symptoms in the same way should be evaluated so that the specialist discards any congenital anomaly.

¿Why do the symptoms of urinary incontinence appear?

In puppies, urinary incontinence is due to certain common causes: absence or lack of recognition of the place to urinate, escape of urine by excitement, excessive fear or malformation.
For the first cause, the ideal is that after the ninth week that the puppy can recognize and choose the place for their needs, we will detail and teach to do it voluntarily in the place we want. Although, if at home there is no place for your needs, you will have to establish a fixed departure time at the same time, between two and three times a day.
When it is given by excitement it is because of games, effusive or prolonged receptions; that is, those very strong stimuli that cause nervousness cause small amounts of urine to escape. For these cases, it is recommended that the intensity of these stimuli be reduced. You only have to love and reward him when he is calm, otherwise, the behavior will be reinforced.
Among the malformations are those located at the level of the ureters, also called ectopic ureters. This happens when the tube that connects the kidney and the bladder comes out and empties into the urine around the vulva or penis.
In castrated dogs, urinary incontinence occurs due to hormonal deficit. In females, due to estrogen deficiency and in males due to testosterone deficiency. These deficiencies cause the muscle tone of the sphincter to weaken, since these hormones are what give strength to the organ.
Elderly dogs suffer changes in the brain, related to advanced age. One of them is cognitive dysfunction syndrome. One of its symptoms is urinary incontinence that may be related to kidney disease, diabetes or Cushing’s syndrome.
Other causes of urinary incontinence in dogs are neurogenic, a spinal cord injury that affects the nerves that control the bladder.
Hypersensitivity incontinence is when the bladder is obstructed by urethral stones, tumors or stenosis. Renal failure is another common cause of urinary incontinence in dogs. These symptoms, together with others such as vomit and foul breath, may indicate that the dog suffers from kidney failure.

Treatment of urinary incontinence in dogs

As previously mentioned, in order to properly treat the dog it is necessary to take it to the veterinarian in order to determine the original cause of the incontinence.
In urinary incontinence caused by malformations, surgical surgery can be used to join the kidney canal to the bladder.
Dogs that suffer from stress incontinence are affected by some stimulus from their environment. They suffer from fear and nervousness, to the point that they can not contain the urine. For this case, the treatment would be to limit the cause of the nervousness. The punishment does not solve the problem, moreover, it could cause a trauma.
For incontinence caused by hormonal deficit, the treatment is pharmacological, increasing the presence of estrogen or testosterone that benefits the strengthening of the sphincter.
It is important to keep in mind that urinary incontinence in dogs should not be treated as an isolated case as it is a consequence of major illnesses or behaviors that the dog adopts in certain situations. This condition is, therefore, a multifactorial problem.

¿How often do you take the pet to the vet?