Tropical fish for your aquarium 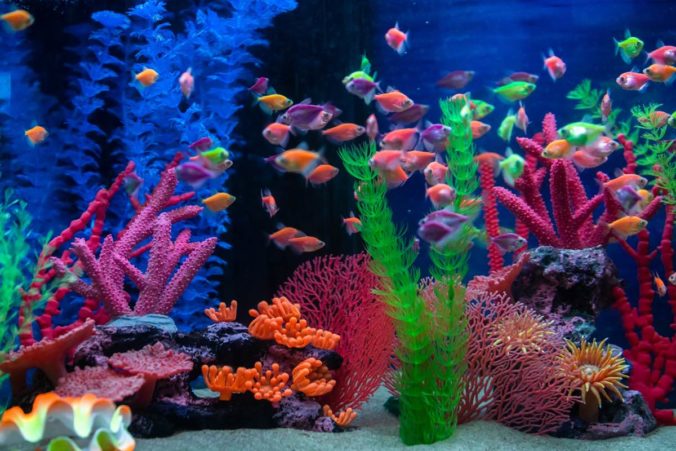 Tropical fish for your aquarium

Have you bought a fish tank or are you thinking of buying one and are wondering what are the best tropical fish for it? You have reached the right article! All the fish that we name below have been selected for reasons such as their resistance, price, size and eating habits. Is the one you would like to have among them? Check out.

The Guppy fish (Poecilia reticulata), also known as the millionth fish or rainbow fish, is known worldwide. Naturally, it originates from South America, but today it is mainly bred in captivity. It is now a common domestic tropical fish that almost all aquarists want to have in their home, due to, among other things, its affordable cost and ease of maintenance.

They are available in a wide variety of colors. This fish is extremely easy to care for as it requires fairly low maintenance and has a calm temperament that suits most beginner aquariums. They are a resistant breed, since they can adapt to a variable water condition that makes them perfect for those starting out in the world of aquariums. These omnivores are not picky eaters, and their diet may include fish flakes, live or frozen brine shrimp, daphnia, and worms.

They are extremely harmonious and mix well with other peaceful fish. Since they reproduce quickly, you should keep the male and female population under control.

Molly fish (Poecilia sphenops) are originally from Malaysia and are popular for their passive temperament and also for their high adaptability. You can easily find them at a low price, and in a great color combination to choose from. Plus, they are playful and energetic.

Since they grow to only 6-15 centimeters, you won’t need too big aquariums.
Being tough and less aggressive, this versatile fish is a particularly suitable choice for beginners.

They’re also great for cleaning the aquarium itself, as they love algae and dig in the substrate and descale dirt trapped in gravel, making it easier for the filter to pick it up.

Danio rerio or the zebrafish are native to the Ganges and the Himalaya region. They have a zebra pattern on their thin skin that makes it easily recognizable. Due to its resistance it is an optimal fish for novice keepers who do not know how to install a fish tank.

They grow to 6-7 centimeters and can survive in most water environments, but perform best in large aquariums with 20-30 more fish. Since it has a tendency to jump, you will need to make sure that your aquarium has a tight lid.

These omnivores will eat almost anything. It can be fed with a varied diet of fish flakes, worms and frozen foods.

The Siam fighting fish (Betta splendens) of Thailand is one of the most popular fish in the freshwater aquarium trade. The reason is due to an aesthetically attractive appearance. They are extremely hardy fish when kept in waters suitable for them, although they are often found in tanks or aquariums too small for them.

These beauties are very easy to care for. As omnivorous fish, they require animal and plant-based foods in the form of fish flakes or worms.

With a growth of up to 6-7 centimeters, they can have a somewhat annoying character and you should be careful with him and the other inhabitants of your aquarium. They are not called fighting fish for nothing. They will fight to the death if two males coexist in the same place.

The Corydoras fish is original from Brazil, South America and the Upper Guaporé River. 140 types are available to choose from and at affordable prices, it is a perfect example for your tropical aquarium. They have a cold temperament and can have a long life of up to twenty years.

They are a very sociable species and thrive in community aquariums consisting of mixed species. They’re admirable when it comes to meticulous aquarium cleaning – they’ll pick up food scraps from the bottom gravel whenever they can. Still, your omnivorous appetite needs to be satiated even more with a well-balanced diet consisting of dry, live frozen and flaked foods.

The swordtail fish (Xiphophorus hellerii) dates back to North and Central America. They are without a doubt the most dominant species to date in most tropical aquariums.

This highly sought after freshwater fish is a treat for aquarium lovers due to its effortless care routine. Friendly in nature, they clearly belong to a community habitat, but can be territorial to other males of the same species.

They usually attract attention because of their sword-shaped tail. They can grow to around 10 centimeters. As for food, it will serve delicacies such as vegetable flakes, tubifex blood worms, brine shrimp or plant-based diets, including algae.

The Oscar fish (Astronotus ocellatus), also recognized as copaneca or acarahuazú pavón, is from South America.

They are classified as semi-aggressive, therefore, they are kept in their own aquarium (they are non-community oriented species), but they live better in pairs. If kept with other fish, they should be similar in size and aggressive in nature.

Efficient water maintenance and the filtration system will be helpful as they produce a lot of waste. You will need to make regular water changes every week to remove excess residue and food debris.

You can feed them with ocean plankton, small fish, blood worms, flakes, tetracyclic potato chips, and earthworms. You will have to house them in a large aquarium with good filtration.

The angelfish (Pterophyllum) comes from the Amazon basin, the tropical region of South America and the Orinoco basin. These elegant fish grow up to 20 centimeters and can be seen in a wide range of tones. They are very resistant and easy to care for, but can be somewhat aggressive from time to time. Taking into account their temperament, they should be kept alone or in a large fish bowl that reduces possible aggressions. Their nutritional requirements include (2-3 times a day) worms, small crustaceans, shrimp pellets, seaweed, frozen live food, etc.

Everything you need to know about the Persian cat

The dangers of spikes in dogs