The slow loris: a primate with bulging eyes 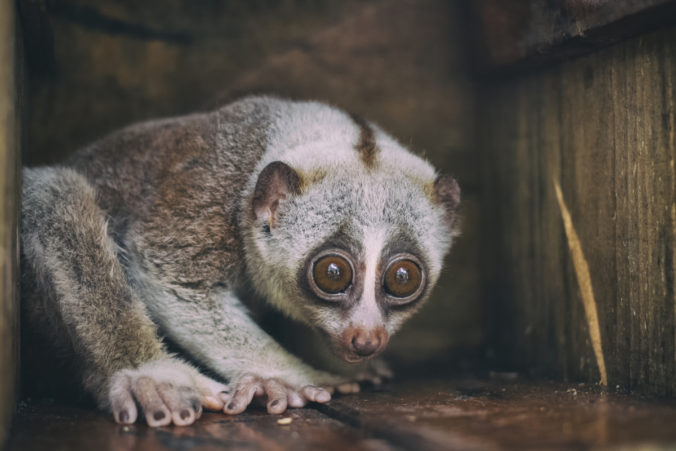 The slow loris: a primate with bulging eyes

The slow loris, slow loris or lazy loris is a relatively little known primate, despite the fact that, unfortunately, its illegal traffic has increased exponentially in recent years. Do you want to meet one of the most curious looking animals on the planet?

Slow lorises are primate mammals that live mainly in Southeast Asia. They can usually be found in countries such as India, Bangladesh, the Philippines or the island of Java.

There are several species of slow loris, although eight different species are officially distinguished. They are relatives of other well-known primates, such as pothos, galagos or slender lorises, very similar to them, but very little is known about their evolutionary history.

Slow lorises are, on many occasions, confused with other mammals, such as sloths, since they do not resemble the classic monkeys: their head is rounded and their muzzle is smaller and their eyes large.

In addition, slow lorises are animals that have different color patterns in their fur, depending on the species. They have a long trunk and hands and feet that can grip things with some force, allowing them to hold on firmly to trees.

The behavior of the slow loris

Curiously, the slow loris has a peculiarity that it does not share with other mammals: they are the only mammals that have poisonous glands, specifically in their arms.

In this way, when they feel threatened they begin to lick the gland, causing the toxins to pass into the animal’s mouth. The moment these toxins mix with saliva, they are activated, so they can use the bite against predators or people to protect themselves.

Despite this, the slow loris is generally a very calm animal and only attacks when it feels truly cornered. His defense strategy is to stay very still in the branches of the tree he is in: he is usually only attacked by snakes, eagles and, in some cases, by orangutans.

Little is known about this silent animal about their behavior, and their specific social structure is unknown, but without a doubt, we know that they are solitary animals.

The slow loris communicates through olfactory marking, that is, it marks the territoriality of the males.

As with other primates, the young of the slow loris depend 100% on their parents, creating a strong bond with them from birth. They are omnivorous animals, and therefore they eat anything from fruit, leaves, they can even hunt small animals.

The slow loris is in danger

Unfortunately, the slow loris is in danger of extinction according to the IUCN Red List of Threatened Species.

The main threats to these animals is the fragmentation of their habitat due to problems such as palm oil and logging, but also, to a large extent these animals are in danger of extinction or in a vulnerable state due to oriental medicine. On the other hand, animal exploitation continues to be a cause that affects many animals around the world, and the slow loris is also a victim of it.

All about liver failure in cats

This is the Pembroke Welsh Corgi