¿How is the pregnancy diagnosis made in domestic species? 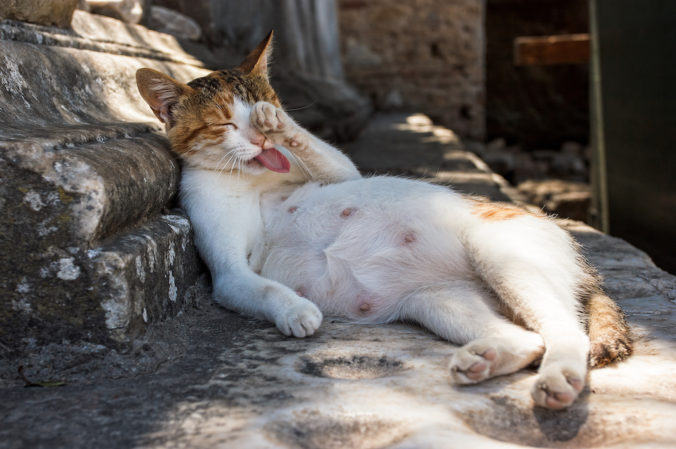 ¿How is the pregnancy diagnosis made in domestic species?

Many people go to the veterinarian to make the diagnosis of gestation of their pets, for which imaging techniques and serological tests are performed. However, there are situations in which the analysis of gestational age and fetal maturation is especially important, especially if we do not know the date of ovulation.
Pregnancy occurs when the female carries in the uterus an embryo or a fetus after the fertilization of the ovum by the sperm. Like all living beings, pets have a reproductive cycle; In the present article, we will know how the pregnancy diagnosis is made in domestic species.

Diagnosis of pregnancy in dogs and cats

There are some physical signs, common in domestic species such as the dog or the cat, that indicate that they are in gestation. The paralysis of the heat cycles, reddish and swollen nipples, increased appetite, vomiting and, most obviously, the increase in the size of the abdomen, reflect that they are pregnant.
Manually, a diagnosis can be made by palpation between days 17 and 20 of pregnancy. This maneuver requires knowledge and skill.
The clinical diagnosis made by the veterinarian offers more accuracy about the gestation time and the development of the fetuses. Among the most commonly used techniques are ultrasound and radiography as imaging techniques, serological tests and hormonal assays, such as relaxin diagnostic kits.
The gestation time, development of the fetuses and hormone levels, vary according to the species. The gestation in dogs and cats is very similar because they hardly vary in a few days, however, it is not the same.

Techniques used for the diagnosis of gestation in dogs and cats

The x-ray is used to estimate the gestational age and the possible date of delivery. Through it some fetal structures are visualized.
When the veterinarian makes the diagnosis with this method, it must take into account the stage of gestation. What is recommended by the specialists is to make an X-ray after the first third of gestation, because the smaller the fetuses, the more sensitive they are to radiation. This technique should be used at the end of pregnancy to count the number of fetuses.
The diagnosis by ultrasound yields an estimation of the gestation time by the measurements of the diameter of the gestational sac. The results are also used to record the evolution of the organs. It also serves to analyze if pregnancy is viable.
Ultrasound is one of the safest and most reliable techniques, it does not produce risks for the animal. In small breeds it is recommended to use mode B, in probes of 5 MHz or 7 MHz. For more accuracy, at the moment of the execution of the diagnosis with this technique the patient must have a full bladder.
Relaxin is a pregnancy-specific hormone in mammals, secreted by the placenta. Some experts say that this type of diagnosis by relaxin is not safe for bitches, since they would be positive due to normal hormonal cycles in heat.
However, in the market the Witness Relaxin kit is commercialized, which allows diagnosing the pregnancy of the dog and the cat, specifically. Also, it allows to distinguish a false gestation in the bitch.
Some commercial brands recommend doing the pregnancy test from the fourth week on bitches and cats after 25 days of riding.

Diagnosis of gestation in rodents

Hamsters and guinea pigs (guinea pigs) are the most common domestic species of rodents.
Two weeks is the time necessary for a hamster to give birth. The diagnosis of pregnancy can be evidenced by the changes in the belly, swollen nipples, weight gain and the elaboration of the nest. Also, if you are accompanied by other hamsters in the cage you will behave in a hostile manner with them.
Unlike previous rodents, the pregnancy of guinea pigs can last up to 68 days, that is, a little over 2 months. The diagnosis of gestation for this domestic species is very similar to that of the hamster and that of mammals in general: swollen nipples, enlargement of the belly and changes in mood.
Ultrasounds may be done, but due to the size of these animals, it is recommended to wait until they show the first physical features of pregnancy.

The gestation period in rabbits is considered one of the shortest of domestic animals. The duration is between 29 and 35 days, with a general average of 31 days.
The diagnosis of pregnancy in rabbits is commonly performed by palpation after 20 days of mounting. It is in this period that the embryos are detectable, not before. The palpation should be done by the veterinarian because, if not done correctly, an abortion can be caused by poor handling.
As a common method to perform pregnancy diagnoses, ultrasound can be used but it is more expensive and takes more time than palpation to know if the rabbit is pregnant.
Behavioral changes becoming aggressive, drinking water more frequently and growth of the abdomen, are some symptoms that reflect that they are pregnant. In some occasions, for the preparation of the nest the rabbits pull the hair from their body for its construction, their intention is to keep the warm newborns, because they are not able to control the body temperature, until after 7 days of birth.
It must be borne in mind that, at the moment of making a diagnosis to a domestic animal, it is safest to inquire about the gestation periods and particular processes of each species. Although most mammals have similar behaviors, each animal has a clinical history that must be respected in order for the pregnancy to develop successfully.