Otitis in dogs: how to identify this disease in our pet 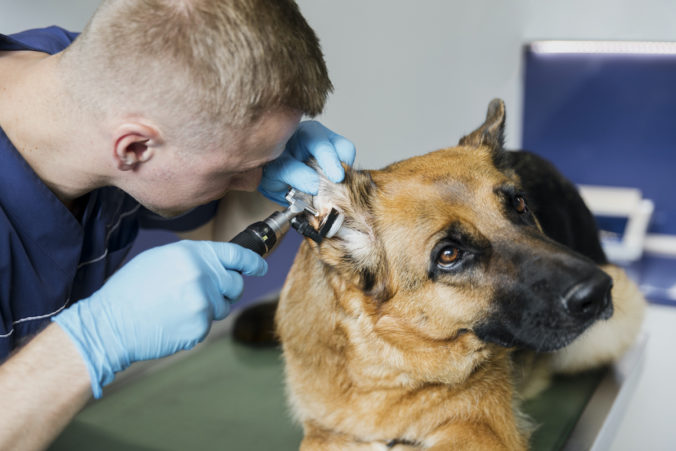 Otitis in dogs: how to identify this disease in our pet

Otitis represents one of the most common diseases in dogs and can become a serious condition if the necessary care is not taken. However, following the appropriate treatment, this disease does not represent a major complication, except for how uncomfortable it becomes for our pet.

Precisely, to prevent it from becoming a serious disease, today we will know in depth what otitis is about and how we can detect it in time.

¿How does otitis manifest in dogs?

Reason for common consultation in veterinary clinics, canine otitis is usually a fairly treatable disease and, usually, when detected in time it does not constitute a greater risk to the health of the animal.

It is a disease of the ear that influences different parts of the anatomy of the ear, and that can occur as consequences of different factors both our own pet and the environment in which it operates.

This inflammation interrupts the proper functioning of the dog’s auditory system, generating partial pain and deafness during the duration of the condition.

¿Why does it give dogs otitis?

We can explain the causes of otitis in many ways, since different factors are involved in the suffering of the dog. Thus, our pet may suffer from otitis due to:

Infection: Otitis can be generated as a result of a scratch infection, a wound close to the ear or contact with an infected animal. Also, it affects the presence of some fungi that grow and inflame the ear canal.

Allergies: Sometimes, otitis can be triggered as an allergic response to some food or topical product that has been given to the dog. Basically, the allergy becomes an infection that ends up inflaming the ear.

Strange elements inside the ear: Dogs that are in constant contact with nature or who do not clean their ears regularly, can end up with otitis due to grass, spikes or sticks in the ear canal.

Climate and humidity: During the summer stage the probability of the dog developing otitis increases; this, related to the increase in temperature, which sets a favorable climate for the proliferation of bacteria and fungi.

Predisposition: There are some factors that are found in certain dogs and that are key to the presentation of the disease, such as, for example, anatomical features such as very long ear canals, drooping ears, much fur in the area or moisture in the area. the area.

Although these factors do not determine the occurrence of the disease, it does make it more feasible in dogs that meet these characteristics.

The type of otitis that the animal presents and its level of severity will depend on the area that has been affected in the ear. Thus, the following typologies can be presented:

Otitis externa: It is the most common and simple to diagnose; It is a condition in the part of the pavilion and external auditory canal, which is treated quite easily.

Otitis media: Approaching the eardrum area a bit more, it is somewhat more complex to treat and requires a much more effective diagnosis to avoid future complications.

Internal otitis: The most serious typology, which affects all internal structures, such as the ducts, the cochlea and can even affect the nervous structures that connect with the brain and eventually take the infection to that area. Most of the time, this otitis is the consequence of carelessness, or an otitis externa that was not treated properly and was strengthened.

¿How to recognize otitis in our pet?

One of the key points of this disease is to detect it in its early stages, that is, when it is an external otitis, to prevent its progression and complication.

Therefore, you should be aware of the presentation of the following symptoms:

Before any occurrence of these symptoms in the dog, it is best to take it to a veterinary consultation as soon as possible.

Complications of a badly cured otitis

Otitis can become chronic if it is not treated constantly. The treatment should not only be applied in a timely manner, but also, in time and correct indications. If not, the medicine will only strengthen the infection and complicate it.

The appearance of an otohematoma or atrial hematoma can also complicate the picture. This type of circular formation constitutes a kind of blood tumor that increases the itching and thinning of the dog, causing it to shake the head continuously and scratch more insistently.

A rupture of this accumulation of blood can become a serious hemorrhage so, if the hematoma occurs, the animal must enter the operating room.

Ultimately, chronic otitis can complicate the dog’s hearing, to the point of leaving him deaf by compromising the auditory nerve.

In other cases, the infection manages to reach the brain and can become more complex pictures that end up ending the life of the canine.

In the event that the dog’s breed is predisposed to the disease, there is no further prevention beyond ensuring constant medical control and identifying any symptoms that may occur.

It is important to reduce humidity levels, periodically clean the auditory pavilion with the correct instruments and be aware of the dog’s diet and diet.

The key is to always be aware and consult with the veterinarian about any anomaly.

¿How to perform the hygiene of a dog in the cold months?

This is the process of giving birth to a cat