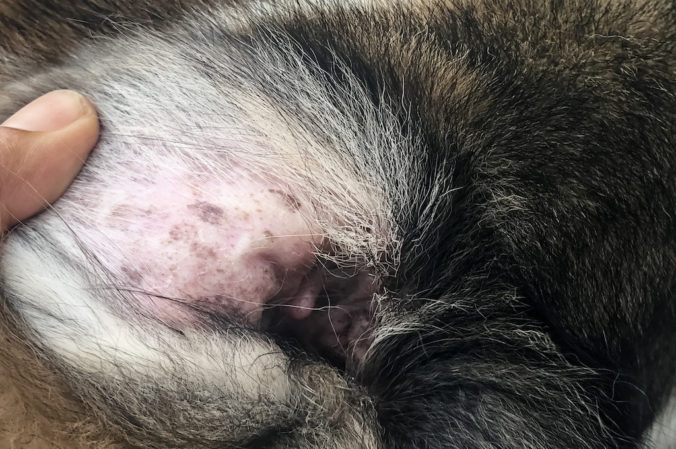 Formerly known as Pityrosporum, Malassezia is a type of fungus classified as yeast, which is present in the skin of both humans and animals. Currently, about 10 species are recognized, of which M. pachydermatis is considered a secondary pathogen in the skin disease of dogs.
In general, Malassezia is present in the skin of dogs. In case the animal has a healthy skin, the presence of this type of fungus does not cause major problem; Now, if the skin is damaged or the pet has low defenses, it is possible that a multiplication of the yeasts is generated, giving rise to the appearance of Malassezia dermatitis.
Although all animals are susceptible to developing Malassezia dermatitis, there is a genetic factor that predisposes a certain breed of dogs to suffer from this problem. In addition, some factors may favor the proliferation of the fungus, such as excessive production of fat on the skin, problems of humidity in the environment, allergies or difficulties in the immune system of the animal.

The diagnosis of Malassezia dermatitis is made with a dermatological test, through the microscopic analysis of a sample taken from the area of ​​the skin that has been affected. Also, the veterinarian is likely to scrape the skin or apply the adhesive tape technique, which is very effective for skin lesions.
Being a habitual resident in the skin of dogs, are often generate doubts among specialists on whether the Malassezia is the real cause of certain symptoms presented by the pet, therefore, it is important that the veterinarian rule out other pathologies that may be generating the problem, such as an allergic reaction to some medication, skin infections or atopy.
Depending on the result obtained, the specialist will be able to determine if it is Malassezia that causes the problem in the skin or turns out to be a secondary disorder to another pathology that needs another treatment. The appropriate diagnosis is usually confirmed according to the response to the treatment indicated by the veterinarian.

In principle, it is advisable to carry out a topical treatment, with special lotions and shampoos prepared with boric or acetic acid. This, to avoid any possibility of side effects that can be generated with systemic treatment.
According to the severity, the specialized veterinarian will establish the appropriate treatment to cure Malassezia dermatitis. Medications such as Ketoconazole, Itraconazole and Fluconazole are some of the most indicated alternatives. Cortisone may also be necessary as a complement to therapy.
As for care at home, it is necessary to keep the dog clean in order to reduce the amount of fat on the skin. Periodic baths with a degreasing shampoo together with some fungicide product prescribed by the veterinarian can serve as a complement to the treatment. Also, it is advisable to change the diet to rule out any allergy problems.

How to properly care for a land turtle

How is the breeding of Australian parakeets