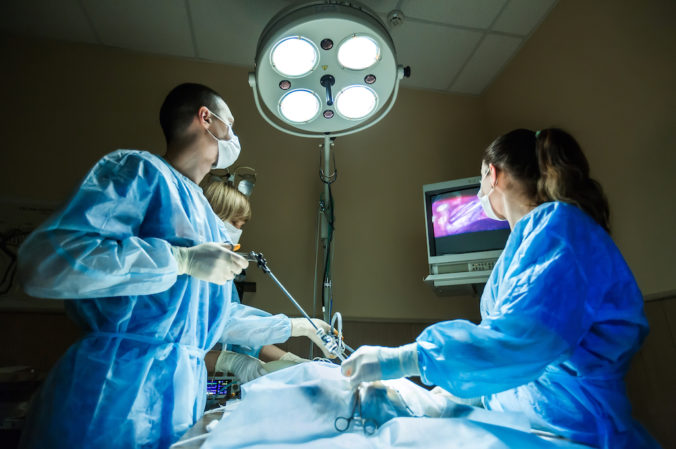 The minimal invasion represents a trend in terms of surgical techniques in veterinary operating rooms. Therefore, laparoscopic surgery is managing to displace conventional treatment thanks to the greater well-being that the pet produces and a faster postoperative recovery. Let’s see in what cases laparoscopic surgery is used in animals.

¿What is laparoscopic surgery?

To understand the subject well, we must know that laparoscopy is a technique used in modern medicine that allows, through a minimal incision, observe in detail the organs of the abdominal area of ​​the body through a tiny camera.
It is common, in these times, for veterinarians to use this type of technique as it effectively helps the diagnosis of an animal before performing more complex interventions.

Applications of surgery by laparoscopy in animals

This surgical technique is used in animals for various reasons; Next, we can name some of the cases where laparoscopy is used in the field of veterinary medicine.

Mostly, this technique is used in the animal (female) to perform ovary removal without complications. There are clinical cases of sterile females that develop cysts because in the sterilization there are ovarian remains, so it is also used to extract this type of material.

It is done by taking a sample of the tissue to be analyzed to obtain a better result at the time of diagnosis. They can be hepatic, splenic or abdominal, pancreatic, renal, gland, gastric, suprarenal, reproductive organs, lymph nodes, small intestine and spleen. With this method, the area where the biopsy will be performed is chosen with better precision and an area of ​​lower vascularity is chosen to check that there is no bleeding that could complicate the intervention.

It is defined when the animals, in this case the males, suffer from an anomaly that does not allow one or both testicles to find their usual position, being outside the scrotal sac.

Like humans, animals also suffer from stones in the gallbladder or kidney stones (lithium) that can not be undone by the urethra but through an infraumbilical laparoscopic surgery called cystotomy.

It is the extirpation of the total or partial kidney, when there are benign or cancerous tumors with the purpose of extracting the diseased tissue. It is also used in cases of kidney donations. In addition, the excision of the adrenal glands due to tumors, called Adrenalectomy, can also be done by laparoscopic technique.
Other cases in which laparoscopic surgery is used in animals is in the gallbladder aspirate, closure of mesenteric defects and prostatectomies.
Laparoscopic surgery is increasingly extended in veterinary medicine thanks to its multiple benefits, among which we can mention less pain in the interventions, greater hemorrhagic control, less manipulation of the tissues and a quick recovery since, sometimes, the Animal patients can leave the office after 4 hours.