Characteristics and care of the Irish setter 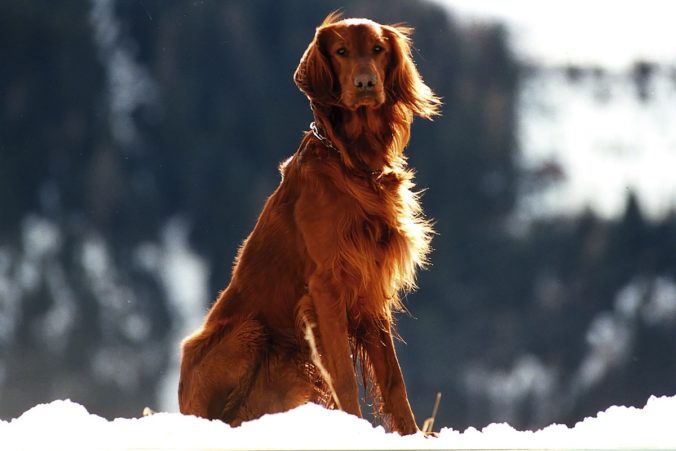 Characteristics and care of the Irish setter

Originally from Ireland at the beginning of the 18th century, the Irish setter is a breed of dogs initially bred as helpers in hunting and trained to find prey. Currently, its upbringing worldwide is aimed at the home company.
Of great nobility and energy, in addition to its particular beauty, the Irish setter has some characteristic features that are very important to know. In the following lines, we tell you some peculiarities of this friendly animal, as well as some advice about its care at home.

The Irish setter is a breed of dogs much appreciated for its panache and posture. The characteristic mahogany color of its fur is its hallmark, in fact, in several countries of the world it is known by the name of red setter, although, in reality, this is a variant of its breed.
Faithful, cheerful, intelligent and friendly, the Irish setter is endowed with great power and energy, being a great company especially in the practice of athletics sports or in activities that involve physical effort.
Because of its natural hunting dog instinct, this animal enjoys a great deal of outdoor activities, playing and running even in adulthood. His cheerful and playful behavior is due to the fact that he maintains the puppies own enthusiasm for a large part of his life.

The Irish setter has a life expectancy of around 12 years. In adulthood, they reach an average height of between 60cm and 65cm in the case of males and between 55cm and 60cm in the case of females.
They have a thin and elongated head, with an oval skull and a snout of moderate depth. His ears are drooping and low insertion; His eyes are medium and dark brown.
His body is generally well proportioned and athletic. As for their weight, males weigh, on average, between 20kg and 30kg, while females usually weigh between 18kg and 25kg.
The color of its fur is a characteristic feature in the Irish setter: mahogany red or dark brown, similar to that of small cocker spaniel. Its fur is short and thin in the area of ​​the head and in the front part of its legs, being a little longer in the rest of its body.
This breed of dogs can develop a disease similar to celiac disease in humans, called gluten-sensitive enteropathy. In addition, some specimens are also prone to suffer from hip dysplasia, progressive retinal atrophy, gastric torsion, canine leukocyte adhesion protein deficiency or canine granulocytopathy, ear infection and epilepsy.

Cheerful, resistant and with a lot of energy

His great energy and physical endurance are two of the most prominent features of the classic Irish setter behavior. By their playful nature, they are dogs that have a lot of fun interacting with children; In addition, this dog breed is fascinated to show affection to their caregivers all the time.
Joy is another very pronounced characteristic of his character, so his relationship with other household animals is usually very good. Their childish behavior is because they are dogs that mature late, so it is convenient to train them since they are puppies to avoid any kind of behavioral problems when they are adults.
In essence, the Irish setter is an ideal breed of dogs to have as a companion animal: it has a low level of aggressiveness, is not territorial and tends to have very good character throughout its life. His affectionate and sociable behavior makes him a faithful companion, rather than a protector or defender of the house.

If you are interested in adopting an Irish setter, you should know that they are dogs that need a large space to live and have large areas to run and feel free. It is not recommended to raise them in apartments or small spaces or in urban areas or with traffic density.
It is necessary to keep your fur well maintained, brushing it at least once a day to keep it shiny and tangle free. Although it may be enough to bathe them at least once a month, the frequency will depend on your daily activity. It is recommended to use specialized shampoo for your bath.
Your diet should be of quality to maintain your energy level and promote the brightness of your coat. They can be two to three portions of balanced food a day, with energy and digestible feed. Preferably, wheat and corn-based feed should be avoided, in order to avoid the health problems to which they are prone. There are good products on a commercial level, specially prepared for this breed of dogs.
In order to ensure its good health and quality of life, it is recommended to take it to the veterinarian with some periodicity; that way, it will be possible to detect any health problem or pathology in time. The veterinarian will determine the necessary vaccines that should be applied to the animal.
Due to the tireless and distracted temperament of the Irish setter, constant and disciplined training is necessary. Daily exercise and methodical and patient training since they are puppies will help build their character and ensure their full growth.
For many decades, the Irish setter is one of the most valued hunting dogs worldwide. This breed, which has unique characteristics to perform its work in hunting, has managed to adapt very well to life within a family.
If you are encouraged to adopt an Irish setter, we recommend you go to an experienced breeder who will give you all the necessary information and advice for your care. We are sure that this adorable breed of dogs can be the ideal company for your home.

¿How long can a hamster live?

Signs and treatment of constipation in rabbits