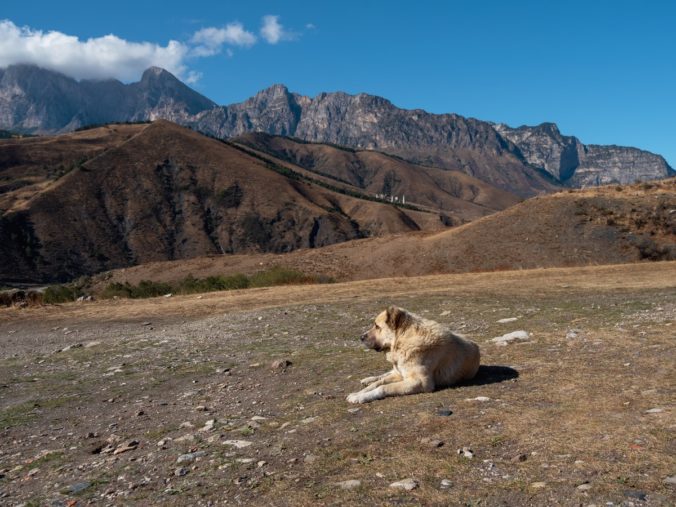 The Alabai dog is one of the oldest dog breeds in the world. It is a dog native to Central Asia and was originally used to protect livestock and property. This was due to their strong temperament and great courage. Today, they are still reserved as a guard and defence dog in working environments, although it is a rare breed to see outside Asia.

If you are interested in knowing more about the Alabai dog breed, don’t miss the following factsheet in which we will tell you about the main characteristics of this great dog, also known as the Central Asian Shepherd.

Origin of the Alabai dog breed

Also known as the Central Asian Shepherd, the Alabai is one of the oldest dog breeds in existence. There is about 4,000 years of history behind this particular dog breed. It is a breed that arose by natural selection, probably originating from Tibetan mastiffs and Mongolian shepherd dogs.

Its origin was in the nomadic tribes of Central Asia, where these large, stocky dogs were used to protect livestock and property against predators and thieves.

Characteristics of the Alabai breed

The Alabai (sometimes spelled Alabay) is a breed of large dog. They are stocky and muscular. Unlike most other dog breeds, the Alabai has significant sexual dimorphism. Males are larger and more temperamental than females. In particular, males typically reach a weight of 50-79 kg and a minimum height of 70 cm, while bitches weigh between 40-65 kg and are at least 65 cm tall.

Harsh living conditions and work as a guard dog have influenced the character of the Alabai. In general, they are strong tempered and self-confident dogs. They are protective of their family, but at the same time they are quite independent dogs who expect to be treated with respect. They are distrustful dogs, often wary of unfamiliar people or animals.

Despite having a strong character, they are calm and quiet and adapt well to changes in their environment. They are guard dogs noted for their endurance, their courage in the face of predators and their natural instinct for territoriality. When they feel threatened, they react quickly, confidently and seriously.

Like any breed of dog, the Alabai requires a certain amount of care to keep it healthy:

What is the health of the Alabai dog breed like?

The Alabai or Central Asian Shepherd is a hardy dog, which has fewer genetic diseases than most other breeds. However, it is not exempt from suffering from pathologies that reduce its well-being and life expectancy, with joint pathologies being the most frequent in this breed.

Do you have a dog of this breed at home? Do you live in Barcelona and are looking for a vet? We can be your veterinary hospital of reference. Contact us!

10 fun and unbelievable facts about horses