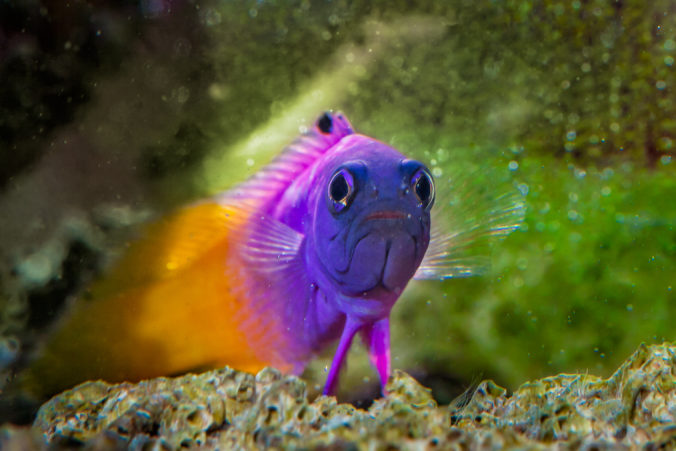 When we refer to the Gramma Loreto, we are talking about one of the most recommended fish for aquariums and community marine facilities. If he were a neighbor in our community, everyone would love him and see him as a good boy who respects and cares for the common space. Would you like to know more about the characteristics of this species and why it should not be missing in your aquarium? Pay attention to the information we offer you.

How is the Gramma loreto?

Gramma loreto is one of the calmest species of character there can be. It is a rather shy and peaceful fish, which does not like to take up more space and prefers to spend most of the time withdrawn in its refuge. Its resistance and ease of care make it a perfect example for any aquarium. Whether you are an amateur or an expert, it is a success to have him.

It is part of the family of Grammatidae (grammatids), and can grow up to 8 centimeters long, having approximately 5 years of life. Two genders can be distinguished in the same family: Gramma and Lipogramma. It is known that the former can measure up to 10 centimeters and that they are original from the west coast of the Atlantic Ocean. As for its colors, they are impressive: they combine an intense purple color with a bright yellow, making it one of the most striking species that exists visually.

Precisely for this color, it is commonly confused with another species: Pseudochromis paccagnellae. Physically they are very similar, but completely opposite in character: aggressive and somewhat more difficult to maintain and care for. To better differentiate them, apart from the attitude of the fish inside the aquarium, you will be able to see how the Gramma loreto has an ocello on top of its dorsal fin, its fins also have color, and behind the gills they show small yellow dots that They blur over the purple color of the front.

Needs and care of the Gramma loreto inside an aquarium

It is truly easy to care for and meet the needs of this species. For the correct maintenance of the Gramma loreto, we should keep them in aquariums with more than 100 liters of water, and whenever possible, adapt the environment so that it is the closest thing to its natural habitat. As we have already told you at the beginning, it is a fish that likes to take shelter and feel sheltered, so try to have enough places to do it. For this same reason, you should also avoid bright lights directly on the aquarium.

Another reason why we encourage you to have a Gramma loreto is for being great cleaners with the residues of other fish: they will remove much of the dead tissue and parasites that form in your aquarium, and that will greatly facilitate cleaning.

Finally, when feeding them, it is recommended to do it between one and two times a day, always with small amounts of food. Like most reef fish, the Gramma loreto will show no problem with food as long as it is small enough to fit in its mouth. They feed on daphnia, brine shrimp, red larvae, flaked food, etc., but from time to time it is advisable to use krill so that its color stays in good color, as well as other live foods to keep it healthy.