All about the extraordinary golden tortoise beetle 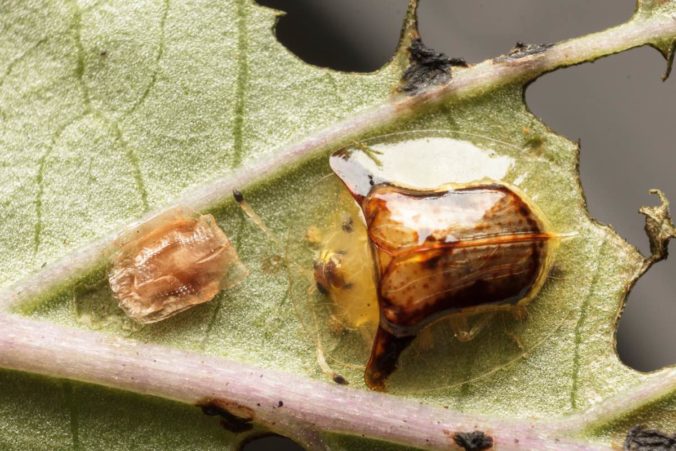 All about the extraordinary golden tortoise beetle

Do you know the golden turtle beetle? It is a species of arthropod, a coleopteran insect, of the chrysomelidae family and of the Charidotella genus, which lives mainly in North America.

What is known about these insects? How can they appear to be bathed in gold? Read on because in this article you will find out everything about them.

The gold tortoise beetle (whose scientific name is known as Charidotella sexpunctata) and some other species of the same subfamily are capable of changing color and adopting a metallic appearance, as if they were real gold jewels.

This insect is mainly found widely distributed throughout the eastern North America. Their body is round in shape and similar in size to some common ladybugs (between 5-7mm in length), and they are generally easier to see during the summer months.

They are usually associated with the sweet potato plant (Ipomoea batatas L. Lam.) And other related species, such as Ipomoea spp and Convolvulus spp.

They are of variable colors that move between orange and gold, reaching metallic tones, hence their generic name. This tonality shift can be accomplished thanks to microscopic valves and humidity control levels underneath your armor.

Regarding their diet, the golden tortoise beetles feed exclusively on the leaves of “Morning glory” or “Morning glory”, whose scientific name is Ipomoea. It is a plant with large green leaves and flowers with a flared shape.

In the reproduction of golden tortoise beetles, about 20 flat-looking white eggs are usually placed on the stems or inner part of the leaves. The larvae hatch from the eggs after 5 to 10 days and are yellowish-brown or reddish-brown. Golden tortoise beetle larvae attach to feces or skins of other animals and become adults after about two weeks from birth.

A beetle that changes color?

In 1979, Edward M. Barrows, a researcher at Georgetown University, published a study where he was able to relate the color change of the golden tortoise beetle (also known as Metriona bicolor) with the act of mating.

To reach this conclusion, Barrows studied a group of golden tortoise beetles by housing them directly in petri dishes in his laboratory, where he fed, cared for and observed their sexual habits until he reached such conclusions.

Edward M. Barrows discovered that, during the act of copulation, adult golden tortoise beetles changed color: they could go from a brownish-orange with some black spots to a shiny, metallic tone, the color of gold.

The beetles usually maintain this golden color when they are not disturbed, and it is precisely the external disturbance that causes them to change from golden to orange with black spots.

Causes of pancreatitis in cats