Giant Schnauzer: everything you need to know about this breed 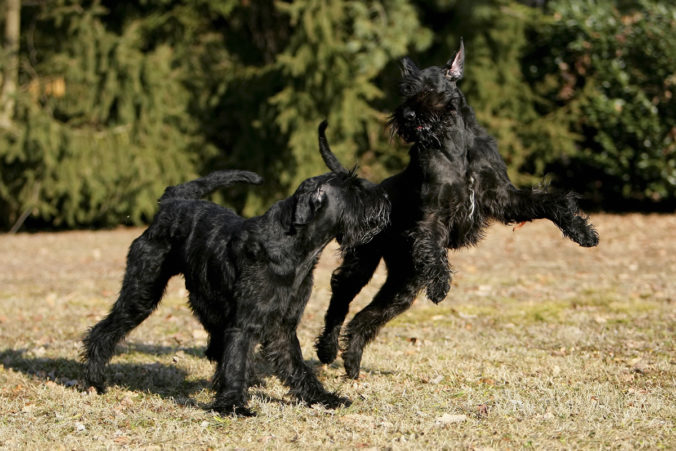 Giant Schnauzer: everything you need to know about this breed

Developed in seventeenth-century Germany, they represent a very resistant breed, raised for work and multiple labors, and although the origin of their race is not entirely clear, some references account for their origin from a combination of several other races , like the German shepherd, boxer, rottweiler and Great Dane; we are referring to the giant schnauzer, the largest variety of its kind and which is known as a robust and beautiful aristocratic dog.

It is one of the most elegant dogs that exist and are ideal for surveillance and grazing tasks, in addition, they are perfect companions for the time to exercise and for long walks, thanks to its large size and excellent physical abilities. Also, they are considered very intelligent dogs and easy training.

With all this, the truth is that giant schnauzer require constant attention and care, so it is necessary to know a little more about this particular breed.

The origin of the giant schnauzer

This breed emerged with the concern of German farmers, who, in essence, wanted to achieve the same charm, elegance and beauty of the conventional schnauzer, but with a larger size and, therefore, greater agility.

The idea was to achieve a sturdy, skilled and good-natured dog like the schnauzer, but capable of successfully grazing cattle and helping with the care of cattle.

Thus, various crossings were made between the small race, the German shepherd, the Great Dane and the Flanders, with, perhaps, some other races; however, there were no formal records of the crossing attempts.

During the stage of World War II, the population of this giant race decreased considerably, to later recompose itself, once the war was over.

Nowadays, most of the owners use them as pets and, although they have a lot of potential as police dogs, they have not been very used in force because of how flashy they can turn out to be.

Characteristics of the giant schnauzer

This elegant breed usually measures between 60cm and 70cm in height and weigh about 35kg to 45kg if they are healthy. It is considered a robust animal, quite strong and very similar to the traditional schnauzer, only much larger.

They have a broad chest and long legs, with a large head full of hair and well-populated eyebrows. The ears, which are one of its characteristic points, are “V” shaped and raised. In the past his ears were trimmed by aesthetic issues, however, this practice was extinguished.

As for the fur, it is usually a combination between a thick layer closer to the body and a fairly short outer coat with barbed texture, which gives the particular shape to the beard and eyebrows, popular in all schnauzers.

Intelligence is a particular feature of this race. They are considered sociable animals, very loyal, quite intrepid and, above all, of a stable temperament.

In some cases they can be considered aggressive if they are not raised in the right way; This is because they tend to be quite suspicious of their territory and take great care of their spaces. If they are not taught to share, they can be somewhat conflicting.

Giant schnauzer have a very dynamic temperament. They enjoy physical activity regularly, are quite animated and adapt with pleasure to routines. Therefore, with proper breeding and constant contact, they are the ideal pet for very energetic people.

They are considered the ideal pet in families with teenagers, dynamic adults and not very young children. It is important to keep in mind that giant schnauzer like to play with the body and can be heavy for a child.

Care of this particular breed

Giant schnauzer dogs are that require specific attention and care. For example, in terms of fur, although they do not require a too excessive routine, they require frequent brushing, at least twice a week.

Two of the most delicate and characteristic points in this breed are the beard and the eyebrows. It is important to be careful to clean your beard of any food or water, to avoid odors. Also, in the case of the eyebrows, you have to be careful to trim the hair to prevent it from obstructing your eyesight. It is essential to accustom the canine to regular visits to the hairdresser at least about three times a year.

As for their physical activity, given their characteristics and their connection with the German shepherd, it is crucial that they be exercised at least three times a day. However, taking them out for a walk is not enough; This breed demands canine sports, more strenuous physical activities and contact with other animals, to favor the development of social skills.

They are considered quite independent animals, but they don’t get along very well with loneliness, so constant company is crucial.

Health of the giant schnauzer

In general, this breed enjoys a good physical condition, perhaps because of the level of dynamism they usually have; However, like all races, they have a predisposition to some diseases, including suffering from epilepsy, gastric problems, hip dysplasia, sprains due to sudden play and cancer.

Finally, weight is another disadvantage of these animals. Usually, they should not exceed 45kg; Even so, some specimens can be exceeded, especially if they are not exercised with the level of frequency and intensity that the breed demands.

Large and imposing, the giant schnauzer can be aggressive if it is not raised correctly; Therefore, it is crucial that from a puppy interact with other races, species and children.

During this process, it is necessary to include training techniques, although these should always be positive. Given their character, they are quite reactive to punishments and may eventually become rebellious before the instructions if they are penalized very often.

Tartar in dogs: why does it appear and how to avoid it?