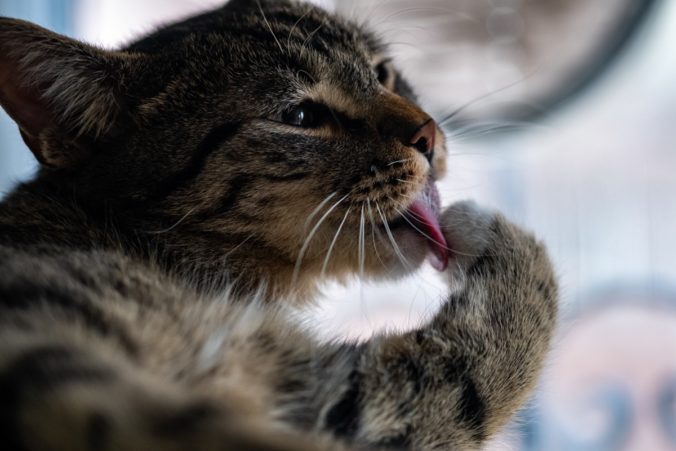 Cats are very hygienic animals and spend much of their day grooming themselves. Although cats may devote a large part of their day to grooming, it is usually done in a dispersed rather than compulsive manner. For cats with feline hyperesthesia syndrome, grooming is very intense and prolonged. The results can be detrimental to your cat’s health, so let us tell you about it!

What is hyperaesthesia in cats?

Hyperesthesia in cats refers to an abnormal increase in sensitivity to certain stimuli. Specifically, feline hyperesthesia syndrome is a disorder characterised by a number of different symptoms. Although it is sometimes referred to as rolling skin disease, or nervous cat disease, this is not quite the case. Being more of a syndrome than a disease, it is a collection of clinical signs affecting the endocrine, exocrine, nervous and neuromuscular systems.

While we will look at the symptoms in more detail below, it is a condition characterised by repeated scratching and biting of the lumbar area. We may also see the cat’s skin moving on its own, a rippling that gives it the name of rolling skin disease. As with other seizure syndromes, the case of hyperesthesia is episodic. It does not usually last long and resolves quickly.

The main problems arise when the cat has repeated episodes and mutilates in the process. Hyperesthesia is also very stressful for the cat during an episode.

There are other names by which this syndrome is often referred to. These include nervous cat syndrome, neuritis or neurodermatitis. This is because the resulting excessive grooming can lead to inflammation of the skin, although the underlying cause appears to be neurological.

Some causes of feline hyperaesthesia

The three main theories are:

While no genetic link has been proven, there is a recorded propensity in certain breeds. Certain breeds of Asian cats, such as the Burmese, Abyssinian and Himalayan, seem to develop hyperaesthesia, more so than others, suggesting some hereditary factor.

Symptoms of hyperesthesia in cats

The main symptom during episodes of hyperesthesia is that the cat begins to repeatedly lick the area of the back and tail, i.e. the lumbar region. When the syndrome is sufficiently advanced, it is also possible that the cat will self-mutilate to counteract the unpleasant sensation which is accompanied by spasms of the skin.

Although we stress that an underlying neurological cause has not been confirmed, it may affect the nervous system and cause the following:

Although many of these clinical signs are non-specific, the wounds and the attack on the lower back are characteristic. If we see this symptom in our cat, we should consider hyperesthesia as a possible cause.

Diagnosis of hyperesthesia in cats

As feline hyperesthesia syndrome is rare and often has non-specific symptoms, it will require a differential diagnosis to rule out other possible causes. This can only be done by a veterinarian, but it is important to record specific symptoms and behaviours before doing so. It is not always likely that an episode will occur while the cat is in the veterinary clinic, so we will need to be as specific as possible.

Treatment of hyperesthesia in cats

As the causes are poorly understood, treatment of feline hyperesthesia syndrome is difficult. What works for one cat may not be suitable for another. There are general measures we can take to help prevent seizure episodes. They include:

We should not attempt to intervene during an attack of hyperesthesia in cats. Although it may be very complicated for us, doing so may cause more harm to the cat and even result in aggression.

Do you live in Barcelona and think your kitten is going through something like this? If you suspect that he is suffering from feline hyperesthesia, do not hesitate for a moment, make an appointment with us and come to see us to find as soon as possible an appropriate diagnosis and treatment to help him.

How long does it take for a dog to give birth?