Entropion in dogs: causes and treatment 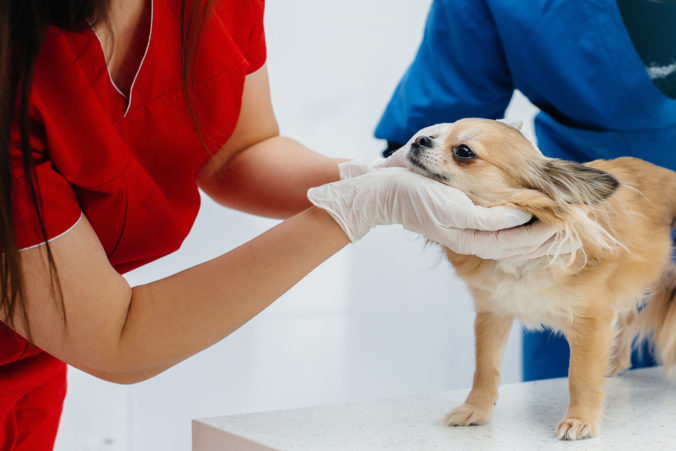 Entropion in dogs: causes and treatment

Entropion in dogs is an anomaly found in the eyelids of our furry companions, in which they move inward, causing pain and other health problems.

In this article we are going to know what entropion is, what are the causes, symptoms, treatment and possible forms of prevention.

What is entropion in dogs?

Entropion in dogs is an abnormality in which the animal’s eyelids are turned towards the inside of the eye. This causes the hair on the surface of the eyelid to rub against the cornea of ​​the eye and cause pain, corneal ulcers, perforations or even the development of pigment in the cornea that can interfere with your vision.

This abnormality can occur with the upper eyelid, the lower eyelid, or both eyelids, although it is much more common in the lower eyelid. It is also very common for it to happen in both eyes, although it can also occur in only one. As a consequence of the friction of the eyelashes against the eyeball, friction, irritation, discomfort and pain occur. If not treated in time, this condition can cause serious damage to the eyes.

Entropion in dogs should not be confused with ectropion, since they are also opposite symptoms: in ectropion, the dog’s eyelids turn outward.

Causes of entropion in dogs

There are two different types of entropion in dogs, depending on the symptoms it causes, it can be primary entropion or secondary entropion:

Primary entropion is most commonly detected in puppies and young dogs. It has a very important genetic component, so it is more common to find it in certain breeds. It is especially found in breeds that have flat faces and flattened noses, or those with wrinkled faces. Thus, the breeds with the highest probability of suffering from this disease are:

Secondary entropion occurs more frequently in older dogs and can affect all breeds of dogs. This type of entropion usually occurs as a result of another disease or environmental factors that harm the dog’s health.

The most common causes of secondary entropion in dogs are:

The most common symptoms of entropion in dogs are the following:

If you see that your dog exhibits any of these symptoms, or any other abnormal behavior, it is important that you take him to the vet for proper diagnosis and treatment before the disease becomes too serious to treat.

Entropion in dogs is easy to diagnose, although it can only be detected by clinical auscultation by a professional veterinarian. In any case, the vet will perform a complete eye exam to rule out other associated complications and problems similar to entropion, such as distichiasis or blepharospasm. If deemed necessary, other tests may be ordered for any other abnormalities or complications they find.

Treatment for entropion in dogs

The only treatment to solve this eye problem is through surgery. Surgery in puppies with entropion poses an additional problem, as the disease can continue to develop later. For this reason, in cases of entropion in puppies, the veterinarian may temporarily opt for other regular procedures until the dog reaches an age when he is ready for the appropriate surgery. The prognosis for dogs operated on entropion is excellent, so if your dog needs surgery, you are guaranteed success.

What is entropion surgery in dogs?

Entropion surgery involves removing a section of skin from the affected eye to reverse its inward curl. In many cases, this surgery can be done in two parts: a primary major surgery correction and then a minor corrective surgery.

Your dog will heal completely about two weeks after surgery. Talk to your vet about this procedure and don’t hesitate to ask any questions or concerns you may have.

Can entropion in dogs be prevented?

Unfortunately, entropion in dogs cannot always be prevented. The only thing you can do is try to detect it in time, so that the symptoms do not get worse and the recovery is as favorable as possible.

If your dog belongs to one of the breeds that have a high propensity to suffer from this eye disease, you should pay special attention to his eye care. Make sure to keep them clean and take them regularly to the vet for checkups.

How to identify male and female parrots?

Most common diseases of lovebirds