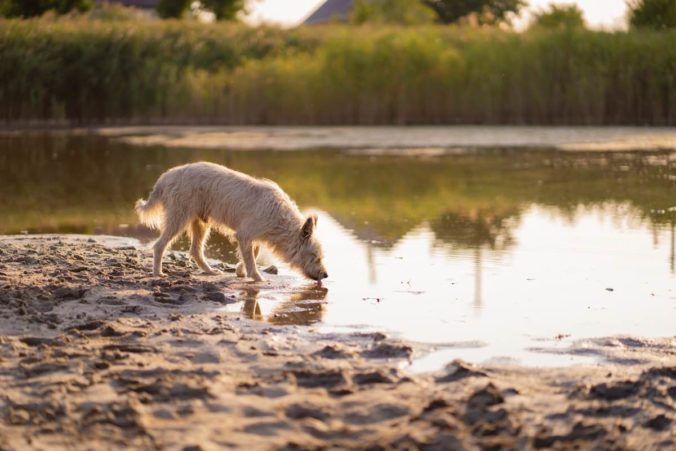 Also known as parasitic diarrhea, Giardia or Giardiasis is an infection that can affect both humans and animals. It is caused by a parasite called Giardia Duodenalis and has diarrhea as one of its main symptoms. This parasite is quite common in many animals, but more cases are detected in dogs, so we would like to inform you about the contagion and symptoms of Giardia in dogs, so that you know what signs to look for and how to prevent it.

As we mentioned earlier, Giardia duodenalis, also scientifically known by other names such as G.intestinalis or G. lambila, is a parasitic infectious disease caused by a protozoan parasite with several genotypes, which can affect several species, commonly dogs and cats. The most common protozoan genotype found in dogs is C and D, and their symptoms can be compared to human “traveling diarrhea.”

Giardia can live in the intestine of an infected dog in a fragile form, or in the open air, in water or feces, where this parasite can actually survive for several months. Most cases occur in dogs under one year of age or in adults who generally live in kennels or shelters.

What animals can get giardiasis?

Although this article is focused on dogs, giardiasis infection occurs in a wide variety of species of domestic and wild mammals that also include cats, cattle, sheep, goats, horses, pigs, beavers, coyotes, primates, rodents, and raccoons

The only way a dog can get Giardia type C or D is by ingesting giardia cysts that are found, as mentioned above, in damp areas or on the ground where there is fecal matter. Reservoirs, places with a humid climate, or lakes are common places where giardia can thrive.

Once the dog has ingested from contaminated soil or water, it will take 5 to 12 days for the infectious parasite to turn into feces, which is when the parasite is ready to reproduce and affect others.

Although in healthy adult dogs giardia can be transient and have no complications other than its symptoms, puppies and elderly dogs can have more fatal consequences if not treated in time.

You should know that the symptoms of giardia in dogs can vary from one dog to another. The older the dog, the more difficult it will be to identify them, since they are not as clear as puppies. Keep in mind that symptoms can be sudden, temporary, intermittent, or chronic, depending on the type of giardia, so be sure to stay alert:

Most animals will not show any of these symptoms in normal health. If you notice any of the symptoms described above, you should take your dog to the vet so that he can be diagnosed accordingly. The veterinarian may request stool samples for analysis in cases where giardia symptoms are not as obvious.

Causes and solutions of constipation in dogs