What is the pseudogestation of a dog 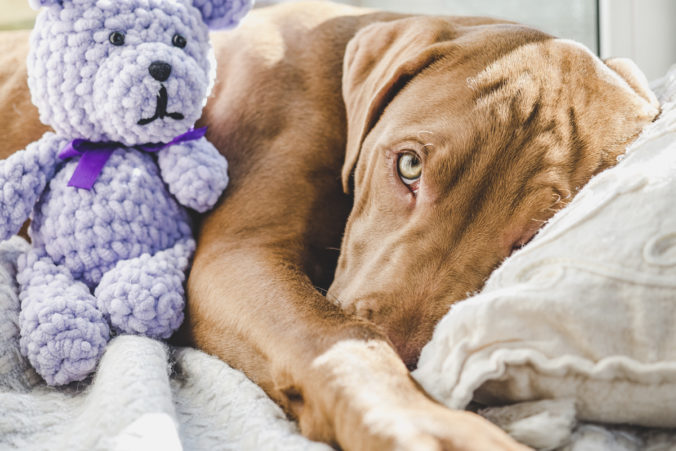 What is the pseudogestation of a dog

Pseudogestation, also known as false pregnancy, pseudociesis or popularly as a psychological pregnancy, is a physiological condition that can develop in various species, including dogs. It occurs as a result of a hormonal alteration after heat and has a high incidence among female dogs that have not been sterilized.

Thus, it is possible to begin to notice alterations in the dog’s behavior and bodily changes of the pregnancy, after six weeks after the heat. In these cases, it is convenient to take the animal to a veterinary consultation, in order to confirm that it is not a real pregnancy.

What happens during the pseudogestation of a dog?

Milk production in the breasts of the dog represents the first symptom to be observed in cases of false pregnancy or pseudogestation. This symptom is called pseudogestation lactation and is due to the increase in the hormones progesterone and estradiol, which are set at the same level as they would be during a real pregnancy.

Contrary to what many people believe, the symptoms of pseudo-pregnancy do not last the same number of months that a pregnancy would last under normal circumstances. This condition should disappear in about 10 days, without leaving any consequence on a physical level.

However, in some cases there may be a possibility that the condition may be complicated due to an infection or some dog behavior; Also, other conditions may occur due to some unusual alteration.

What happens after 10 days of presenting the condition?

One of the aspects that most attracts attention among pet owners who have pseudo-management is the appearance of maternal behaviors, manifested through the collection of objects that are part of their environment and that serve to treat them as if they were their own puppies .

Also, it is possible to notice that the dog manifests itself too tired and altered. It is not surprising that, while the pseudogestation lasts, the dog begins to roam the house, with some signs of sadness and depression.

Other symptoms generated by this hormonal imbalance are referred to certain physical and psychological changes, such as the presence of a bulging abdomen, breast swelling, loss of appetite, vulvar flow, irritability and apathy, although its appearance will depend on other factors and not all of them necessarily appear.

What to do during the pseudo-management of your pet?

One of the most delicate issues in cases of pseudogestation in female dogs is the excessive production of milk or serous fluid. If this condition arises, it is necessary to avoid as much as possible that the animal licks the breasts, since it will start to take out milk, made it helps that the breasts are refilled with milk.

In these cases, the treatment carried out by the veterinarian includes the prescription of a group of specific medications called antiprolactin, which act by decreasing the prolactin hormone.

On the other hand, female dogs that have pseudo-management need to be distracted, so it is very important to perform any activity that manages to keep the animal distracted, such as taking it out for a walk or increasing the frequency of physical exercise.

During the development of these activities, it is also convenient to remove from the dog those objects of the environment that he decided to adopt as his puppies. This is important as it will allow you to distract your mind and decrease the production of hormones typical of pseudogestation.

What are the complications associated with pseudogestation?

Mastitis is one of the main problems associated with pseudogestation and the necessary care must be taken to avoid this condition. It consists of an inflammation of the mammary glands, which can occur with or without infection in one or several glands, and whose degree of involvement in the animal is variable.

If necessary and depending on the state of the dog, the specialist will make the appropriate diagnosis through blood studies, where the leukocytes will indicate if there is inflammation, and will determine the appropriate treatment, which in many cases can be initiated with medications, but which in certain occasions may include surgery.

Another of the studies that the veterinarian can perform for an accurate diagnosis is a microbiological culture of the milk that the animal is producing. Also, you can order an ultrasound of the mammary glands. These studies will help give a safe diagnosis.

In addition to mastitis, another complication associated with pseudogestation is pyometra, an infection of the uterus caused by the accumulation of bacteria in the cervix.

If mastitis is diagnosed, what is the treatment?

The first step in treating mastitis is to apply the correct antibiotic, according to what the crop threw. Among the antibiotics that veterinarians usually prescribe is amoxicillin, cephalexin and cefoxitin.

Once the appropriate antibiotic is established, the specialist can also prescribe an anti-inflammatory medication, in order to relieve pain and inflammation. Some drugs can help reduce milk production.

In situations that are more serious, the option may be the drainage of the abscesses of the mammary glands through surgery, debridement to remove dead tissue or even mastectomy.

It is necessary to be attentive to the appearance of symptoms that may indicate a psychological pregnancy in our pet; Although this condition may disappear with the passing of days, in certain cases it can be complicated so it is recommended to go to a veterinary visit, in order to perform a general evaluation.

Tips and recommendations to care for a clownfish

How is the temperament of Newfoundland dogs?