5 curiosities about the Komodo dragon 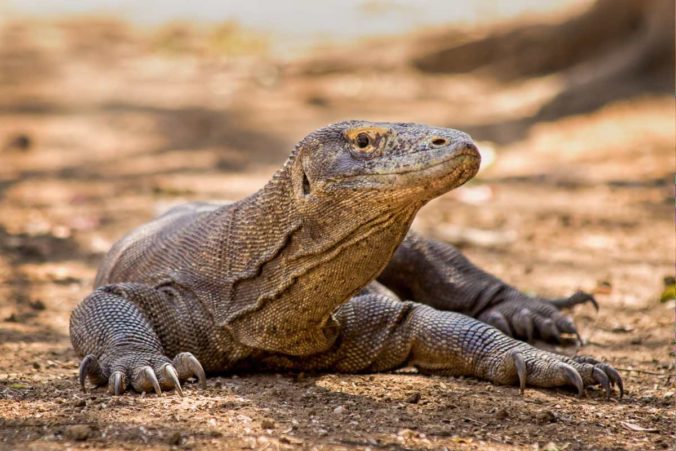 5 curiosities about the Komodo dragon

The Komodo dragon is the largest lizard living on Earth today, growing up to 3 meters long and weighing about 68 kilos, or more. However, while this huge reptile cannot fly or breathe fire, the term “dragon” is less exaggerated than we think.
They are incredible creatures and need neither flight nor fire to be worthy of our awe and admiration. Here are some interesting and curious facts about Komodo dragons.

1. Komodo dragons are native to Australia

While famous for being from the Indonesian island of Komodo and the surrounding islands, the Komodo dragon was first discovered in the land of Down Under. According to fossil records, Komodo dragons (Varanus komodoensis) moved out of Australia and made their way to the islands of Indonesia, reaching the island of Flores around 900,000 years ago.

Komodo dragons may have disappeared from Australia around 50,000 years ago, a disappearance that would have roughly coincided with the arrival of humans on the continent.

Bryan Fry, a poisons researcher at the University of Melbourne in Australia, discovered that the Komodo dragon is in fact one of the few poisonous lizards on the planet. It wasn’t until 2009 that the decades-long myth of how Komodo dragons kill was finally replaced by the truth, thanks in large part to Fry’s research.

Unlike a snake, which injects venom into a victim through its sharp fangs, the venom of a Komodo dragon seeps into the large wounds it makes on any unfortunate animal it attacks. The animal may escape the dragon’s clutches, but it will not escape the poison that will eventually bring it down.

Komodo dragons are large animals. So it’s no wonder they can take down animals as large as wild boar, deer, and buffalo.

To catch their prey, they use an ambush strategy. Camouflaged with their surroundings, they wait for an unsuspecting animal to pass by. They then spring into action and take a poisonous bite before the victim can escape.

4. When it comes to metabolism, they are not like other reptiles.

Most reptiles lack much aerobic capacity, but Komodo dragons are the exception, thanks to a genetic adaptation that researchers discovered when they sequenced the animal’s genome. The researchers’ work showed that these creatures can achieve a metabolism more similar to that of a mammal, which is beneficial when it comes to hunting prey.

The scientists found changes in the mitochondria, which function as the cell’s steam engines. Like a digestive tract, mitochondria absorb nutrients and provide fuel to the cell. This is doubly important for muscle cells, which Komodo dragons have in abundance, and which also explains what’s behind those creatures’ bursts of speed and stamina.

5. Komodo dragons can eat 80% of their weight in one go

When the huge lizards sit down to eat, they are able to swallow up to 80% of their own body weight in food. The big feast and slow digestion mean that after eating, the Komodo dragons will go to rest in the sun, with the heat helping to keep their digestion process going. Once the food is digested, a Komodo dragon will regurgitate what is known as a “gastric ball.” Like owl granules, the gastric granule contains horns, hair, teeth, and other pieces of prey that cannot be digested.
Because their metabolism is quite slow and they can chew so much in one sitting, they can survive on just one meal a month.

Did you know these facts about the Komodo dragon? Without a doubt, a fascinating exotic animal.

What to do if you find an abandoned dog?

Differences between a Persian cat and an Angora cat