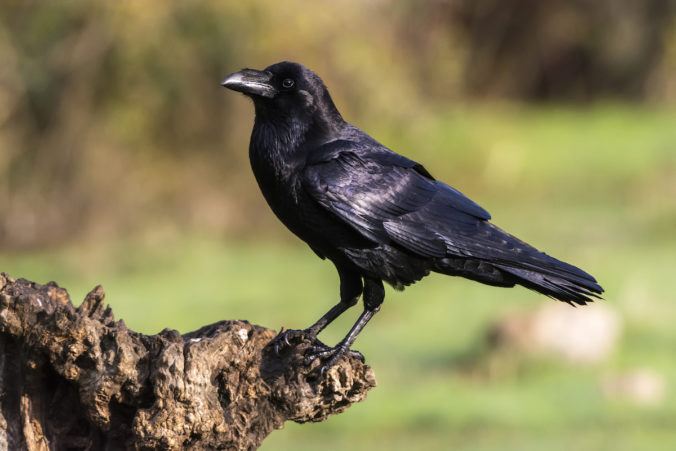 Although they are animals that have historically enjoyed a bad reputation, crows are actually a very friendly type of bird, which we can often see around the house without representing greater danger.

It is one of the most intelligent birds that exist, with an excellent ability to adapt in different spaces and that can manage with what the environment provides. Let us know, then, a little more about the types, characteristics and curiosities of crows.

The Corvus Corax, commonly known as crows, are a type of totally black plumage bird, in most cases, and considered the most intelligent of the whole feather family.

Within them, a total of 40 different types are grouped around the world, both in urban areas and in wildlife, although there are only 5 types that occur frequently.

Although we are used to seeing completely black crows, there are some types that have white plumage and beaks and even some with gray touches on the body. The following are the most common types:

It is the most popular of all and is present in almost all parts of the world. It measures about 70cm and does not weigh more than 2kg.

In the early stages of life they always walk in groups until they find a partner, at which point they decide to stay together and in one place until they die.

The common crow is totally black and imitates sounds quite professionally; It can hide objects, so it is considered the smartest type of all crows.

This subtype, typical of Asia, usually inhabits forests, parks, open-air crops and gardens, although in recent times it has spread to cities, to the point of being considered a plague because of the speed with which it extends and reproduces .

For Asians, they are considered thieves with feathers, since they tend to stalk to take bright objects such as pieces of glass, foil or mirrors, to make their nests.

They measure just around 60cm, have a pointed and wide beak that makes them easily identifiable, in addition, their plumage is not completely black since in the head and part of the body they have gray feathers.

Although it can be confused with the common type, this is much smaller, in fact, it does not exceed 50cm.

One of the best ways to identify him is through his shout, which is loud, short and quite fast, often described as squeaky. It has the whole black body, the long tail, the short beak and is the most common type in the American territory.

This species, typical of Oceania, is a small type of crow that spends its day fluttering to eat and, when not, it blends with plants and foliage.

It measures just 40cm and its head is usually the largest in the body, with an ivory-colored beak that gives it its name and greater hallmark.

This type, although it coexists with the American type, has its own area of ​​action on beaches and coasts. Therefore, it is the most frequent in the State of Washington, Alaska or British Columbia.

Like the common crow, it has all the black plumage, but it is 10cm smaller and feeds on sea fruits.

Characteristics of the Crows

The first image we have of a crow is its black plumage, but there are other elements that are distinctive of this bird.

Regarding size, counting as more than 40 types of crows, each has its own measurements; however, they do not usually exceed 70cm or 2kg in weight.

As for their food, crows feed on insects, fruits, vegetables, small rodents, seeds and, in some cases, carrion meat.

They maintain a balanced diet and when they want a specific food and cannot get it, they can attack another animal to get it.

The habitat of the crow can be in the mountains, through orchards, coasts, forests, gardens and even in captivity, as pets.

Crows have a prognosis of life between 10 to 15 years.

They have a wide repertoire of available sounds, among which is their ability to imitate human tones.

They usually communicate with different sounds, which vary according to the occasion and the message. Thus, the sounds of reproduction, feeding, alarms or the way of calling any companion are markedly different.

In relation to their behavior, crows are considered very intelligent; They usually walk in small groups during the day for food exploration and search activities, but they become very large groups at bedtime.

They have given evidence of presenting gregarious behaviors, supporting flock companions who may be injured or unable to move, providing them with food and shelter.

Some curiosities of the Crows

According to scientists, crows can solve complex problems, manage to manufacture and use their own tools, have a great memory and communicate and learn with each other; Therefore, they are considered fascinating animals and possessing great intelligence.

This is the process of giving birth to a cat

Pet care in the winter months