Chow Chow: the dog with the blue tongue 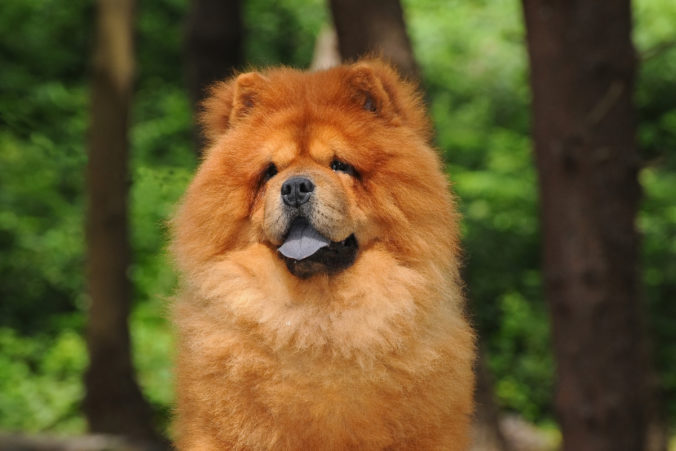 Chow Chow: the dog with the blue tongue

The Chow Chow is a dog that is estimated to have originated in China around 2,000 years ago. Their distinctive blue, grayish-blue, navy blue, or black tongue is a characteristic trait that is more commonly found in lizards than dogs. The Chow Chow is not the only breed of dog to have this distinctive colored tongue, Shar Peis and some other purebred dogs also have this coloration. However, it is far from the only interesting thing about this beloved dog.

In this article we take a look at the characteristics of the bluetongue dog: the Chow Chow. We will talk not only about its characteristics, but also about its temperament and some of the legends that surround this ancient breed of dog.

Characteristics of the blue-tongued dog

The Chow Chow’s blue tongue may not be the first thing you recognize about this dog. Perhaps the beautiful hair that surrounds her face attracts you first. This dog has a double coat that puffs up, making them appear plump despite their good physique.

You can usually find them in a few color varieties ranging from red to gold, but it’s not uncommon to see a dark brown or cream Chow Chow either. Their eyes are deeply sunken and they have a curly tail of medium length that is usually set upwards.

Despite their stocky build, Chow Chows are quite agile. They were known as “war dogs”, and even Marco Polo admired them for their ability to fight alongside their owners. This may seem incongruous with their teddy bear appearance, but it also doesn’t mean they are violent dogs in any way. They can be very calm and gentle dogs. Perhaps due to their ancestral upbringing, they are also very loyal. This means that they can be wary of strangers and sometimes overprotect their owner if they perceive a threat. It is also the reason why they were used as temple guard dogs in some places in Asia, such as China and Tibet, where they originated.

They can also be difficult to train due to their somewhat stubborn nature, which means they need to socialize early. The more they get used to being around other animals and people, the more likely they are to become more level adults. They are a wonderful companion animal, especially for the older ones. Like all dogs, they need moderate exercise, but have relatively low energy. This makes them a good pet choice for almost any home.

Legends about the Chow Chow

There are several legends about how the Chow Chow got its tongue colored blue. The first is related to the dog’s close ties to the Buddhist community in Asia. On a very cold day, a long time ago, a Buddhist monk became very ill. He was so ill that he was incapacitated and could not go out to get firewood to warm himself. The Chow Chows went out into the cold in search of firewood for the monk, but unfortunately all they could find were charred logs. When they were brought back to their mouths, the charring caused their tongues to turn this bluish-black color.

The second legend about the Chow Chow’s blue tongue refers to the Buddha himself, Siddhartha Gautama. While Buddha was painting the sky with his distinctive blue color, he left his brushes on the ground. The curious Chow Chow walked over to the brushes and gave them a lick. In this way it became the permanent color of the dog’s tongue.

Another of the stories that go around the world about the Chow Chow has to do with Queen Victoria herself of England. The queen as a child had a Chow Chow as her pet. She made him accompany her everywhere, but some of her caregivers thought it unwise for a girl to have a dog of that size. In her place, they created a version of a soft toy that she could take with her anywhere (what we now know as Pomeranian).

There are more stories about Chow Chows that are generally linked to their famous owners. Historic names who were known to own the Chow Chow include footballer Mario Balotelli, singer Janet Jackson, cultural icon Elvis Presley, and former US President Calvin Coolidge. Even Sigmund Freud himself had one, which he is said to have used as a therapy dog. Not simply as a way to help the patient relax, but some also claim that he used it to get diagnoses.

The truth about the Chow Chow’s blue tongue

The Chow Chow’s tongue may appear blue, purple, grayish, or black, depending on the dog. The reason for its color is simply due to the presence of pigmented cells, similar to the same types of cells that determine the color of human skin. The dark color of the tongue is a curious trait as it is also found in some wild animals like a giraffe or even some bears, like the polar bear. There is some research to suggest that Chow Chows were derived from a Hemicyon, a kind of cross between a dog and a bear (the name literally means ‘dog-bear’) that lived in the Miocene age. This is a hypothesis and it is difficult to scientifically support it as a fact, but it is not unlikely either. One fact that could support this theory is that the Hemicion has fossils showing it with 44 teeth, and this is a detail that it shares with the Chow Chow.

While Chow Chows may not be the only dog ​​to have a blue tongue, they are the only breed of dog that has lips and a palate characterized by the same color. There are many breeds that have spots of this color, but none have completely dark mucous membranes. A strange fact is that the Chow Chow breed is not born with a blue tongue. Instead, it develops around 2 to 3 months of age. If the tongue does not change color and remains pink, it is said to be not purebred.

The Andalusian horse: a thoroughbred from Spain

What is brucellosis in dogs? Symptoms, treatment and prevention