All about the charismatic “dachshund” 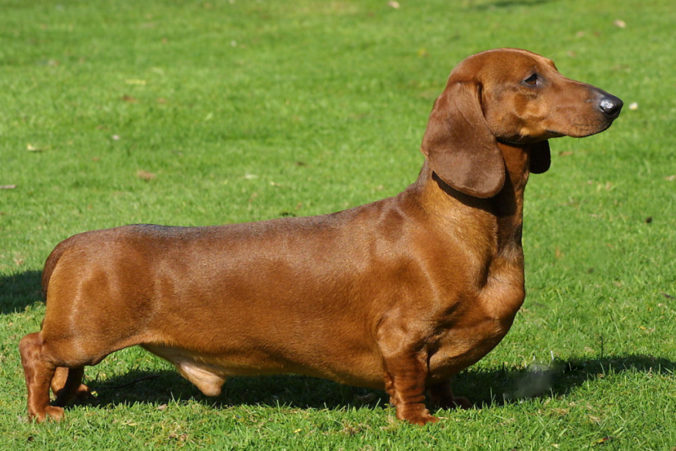 All about the charismatic “dachshund”

The “sausage dog”, “dachshund”, dachshund or dachshund is a most famous and charismatic breed originating in Germany. In English “dachshund” means “badger dog”, and specifically this name refers to its original function as a badger hunting dog.

In this article Hosital Veterinari Glòries we tell you everything you need to know about the famous Dachshund. We will talk about the general characteristics of the breed, its basic care and related health problems. If you’re thinking of adopting a Dachshund, keep reading to find out more!

Physical characteristics of the Dachshund or sausage dog

The dachshund is a short-statured, long-bodied dog. It has short legs and a long head. Its naso-frontal depression is poorly marked, so its snout is elongated. His eyes are oval and medium in size. Its color varies in different shades, from dark brown to black, and even machado in different shades. Their ears are set high, hanging, long with rounded edges.

The body of this dog is elongated. His chest is wide and deep with a slightly raised belly. It has a long but not very high tail, which may have a curl at the third vertebra.

The hair corresponding to each variety must be the following:

The colors that are usually seen in all varieties are:

This breed comes in different varieties depending on its coat and weight. Officially, three varieties of size (standard, miniature and for rabbit hunting) and three varieties of hair (short, hard and long) are recognized. These possible combinations result in nine different types of dachshund:

The smaller (miniature) varieties, despite their size, are also used for hunting. However, they target smaller, less aggressive prey than badgers.

The breed standard does not indicate a particular size, but dachshunds are small dogs and their maximum height at the withers is usually between 25 and 30 centimeters. The difference between the varieties is calculated according to the chest circumference, as follows:

Character of a Dachshund

These dogs are very playful and friendly with their owners. They have a strong hunting drive, so they tend to chase and attack small animals. They can also become great barkers.

It is important to socialize dachshunds from a young age. If they are not socialized, they tend to be naturally wary of strangers. Without proper socialization, they can also tend to be aggressive or fearful, both with strangers and with other dogs. On the other hand, when they are well socialized they can get along very well with people and other dogs. However, it can be difficult to socialize them with other pets.

Dachshunds are commonly said to be very stubborn and do not respond well to training. However, they respond very well to positive training, so do not hesitate and opt for this method of education. This method is based on positive reinforcement and the use of the clicker on some occasions.

The main behavior problems that are common to this breed is that they bark excessively and love to dig as much as they can.

Caring for a dachshund

Caring for a dachshund’s coat is simple, since it does not require dog grooming or other help. Logically, the short-haired dachshund requires less effort than the other types.

In breeds with long and hard hair, it is necessary to brush the coat daily. If you want to cut the hair of a long-haired dachshund, we recommend you go to a dog groomer.

These dogs require moderate exercise. They adapt well to life in apartments or small houses. However, they can cause problems with neighbors because they are often barkers, especially if they do not feel very sure of themselves.

If they are left alone for a long time or get bored, the dachshund can destroy furniture or other objects. If you have a garden, you should know that they have a tendency to dig. Therefore, it is not a good idea to leave them alone for long periods of time.

Health of a Dachshund

Due to its elongated morphology, the dachshund is prone to spinal injuries. Damage to intervertebral discs is common. Accidents that cause paralysis of the hind legs are more frequent in this breed than in others. Therefore, it is important to avoid rough handling of these dogs, jumps, frequent climbs and descents. It is also important to keep an eye on the weight of this breed, as they can easily become overweight if not fed well.

A Dachshund is also prone to the following pathologies:

As with other dog breeds, it is best to carry out regular veterinary check-ups and keep your dog’s vaccination and deworming schedule up to date. Are you looking for a veterinary hospital in Barcelona that will help you with the health of your furry? Leave your companion in the hands of the best veterinary professionals. We are waiting for you at Hospital Veterinari Glòries. Call us at 932 460 805 and make an appointment!

The most curious facts about koalas