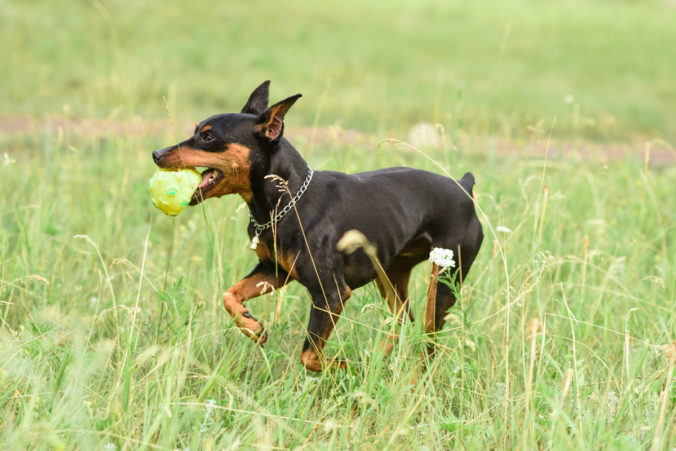 The Miniature Pinscher, also known as “Min Pinscher”, is a small breed of German-born pinscher type dog. It is a breed that, although small, has a strong and predominant character. Still, they are very loving and sociable with their caregivers and family. Of course, they are not so friendly when they meet a stranger.

Origin of the Miniature Pinscher dog

This breed originated in Germany, from crosses between the German Pinscher, the Italian Greyhound and the Dachshund (Teckel, or sausage dog). They are also known as Min Pinscher or “Zwergpinscher”. Many people believe that this breed is a miniature Doberman, but this is not the case at all. Although both breeds share some ancestry, the Miniature Pinscher is much older than the Doberman.

Today, this Pinscher is one of the most popular and beloved small dog breeds among dog lovers. Although caring for them may require more effort than other small dog breeds, mainly due to their character.

The Miniature Pinscher is the smallest version of the German Pinscher. They are small and square in profile, since the length of their body is equal to their height at the withers. Its lines are fine and elegant. The height at the withers is 24.8 to 30 centimeters and they weigh approximately 4 to 6 kilos.

The head of the Miniature Pinscher is elongated with a smooth but clearly defined naso-frontal depression. Their nose is usually black but it can also be brown depending on the color of their fur. His eyes are dark brown and oval.

Their ears can be erect or folded and are shaped like an inverted “V”. In the past, it was customary to cut them to ensure they were erect, but thankfully that practice has disappeared.

Its body is short, small and compact. Like the custom of cutting the ears, its tail also used to be shortened, which is no longer the case today, fortunately. His hair is short and thick. The most popular colors are brindle, black, brown, reddish, cream, fawn, and greyish.

What is the personality of the Miniature Pinscher like?

Miniature Pinschers are full of life, they are dynamic, curious and courageous. Despite their small size, they are strong-willed. That is why it is very important to socialize these dogs from a young age. If it is not socialized properly, it will have behavioral problems as an adult dog.

Another fact that you will be interested to know is that boring miniature pinschers can be somewhat destructive. That is why it is important not to leave them alone for long periods of time. When it comes to noise, these dogs are not as loud as other small dogs.

Taking care of these dogs is pretty easy and shouldn’t take long. For their fur, weekly brushing is sufficient, and you only have to bathe them when they get dirty. These dogs are very active, so they will need a good dose of daily exercise, but due to their small size you can also satisfy their needs for exercise indoors.

This does not mean that you can substitute walking outdoors for exercising indoors. It just means that they can go a day or two without it, but outdoor walks will allow them to socialize with other people, animals and items outside, discover new places, smell, etc.

Miniature pinschers are perfectly adapted to living in small apartments or houses. Although they enjoy a garden where they can play, they cannot be kept outdoors and alone for long. This type of dog, due to its size, needs to sleep indoors.

Education and training of the Miniature Pinscher

When it comes to training these dogs, it is best done through positive reinforcement. The traditional method can cause problems, especially due to the temperament of these dogs. When you use positive reinforcement to coach and coach them, you are mentally stimulating them while at the same time creating a stronger bond with them.

Remember to do short training sessions of 5 to 15 minutes if you really want to see good results in the short and long term.

The health of the Miniature Pinscher

The Miniature Pinscher tends to be a healthy dog ​​and the breed is not particularly prone to any particular canine disease. Occasional progressive retinal atrophy or patellar dislocation may occur, but it is not very common. Obesity can also be a problem, because these dogs are often very gluttonous.

Take care of his diet, train him often, let him socialize properly and you will have a happy dog ​​by your side.