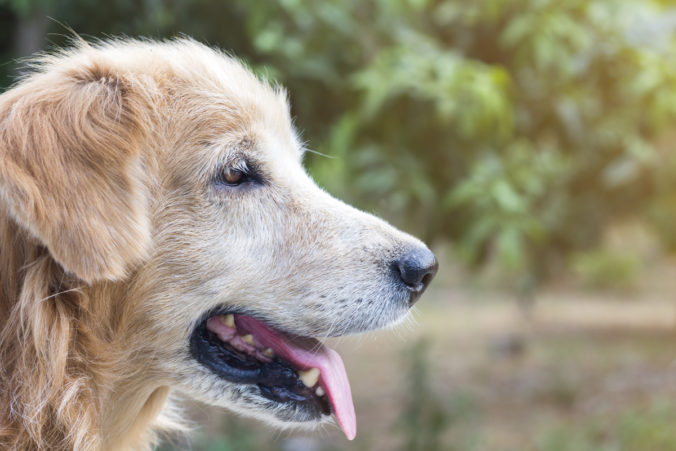 Forgetfulness, disorientation, lack of memory and personality changes are just some of the symptoms that may be indicating the presence of Alzheimer in dogs, a condition that occurs in older dogs and is characterized by generating very marked in the behavior of the animal.

Also called Cognitive Dysfunction Syndrome or canine dementia, Alzheimer’s in dogs affects the animal’s memory in the same way that it does in humans, deteriorating its quality of life. However, many of these signs also appear in other diseases, so it is important to carry out a detailed analysis to find the indicated diagnosis.

Dogs age at a faster rate than humans, so we can see the ravages of the years in their bodies. It is considered that, from the age of 8, these animals begin to feel symptoms of aging and, therefore, enter the so-called third age, which can be very long in some cases.

Some dogs live their entire lives without manifesting health problems, especially on the mental plane, however, according to some studies, more than half of them older than 8 years of age may experience symptoms of the so-called cognitive dysfunction syndrome or canine Alzheimer’s , a neurodegenerative pathology that affects their cognitive abilities and their relationship with the environment.

Physiological changes in the dog’s brain related to aging added to the accumulation of proteins at the brain level, could be the cause of Alzheimer’s disease in dogs. The probability that the dog, over the years, will suffer from this disease is quite high, even, much of the behavior that we attribute to other pathologies occurs as a consequence of canine Alzheimer’s disease.

It is usual for the owner to attribute the symptoms presented by the dog to signs of the animal’s age. However, it is possible to identify this disease taking into account four well differentiated symptomatic categories:

In principle, the dog with Alzheimer’s disease can present an alteration in its sleep cycle, sleeping in hours that are not the usual ones, such as, for example, in the morning, while staying awake for much of the night.

Alzheimer’s primarily affects memory and poor concentration. This condition can be noticed when you stop obeying orders that you previously carried out without problems. Lack of concentration manifests itself when the animal stops paying attention to its master’s gestures and directions or forgets its meaning.

It is usual for the animal to be disoriented, getting lost in the streets that it knew perfectly in the past, even with difficulties in recognizing its own home. The dog with Alzheimer’s often moves around the house in an insecure way, without recognizing the paths and without identifying his own objects.

In addition to forgetting, the dog that suffers from this pathology has difficulties to retain what is being taught; Also, it is possible to notice certain changes in their behavior, such as starting to relieve themselves at home or any other alteration related to their habitual behavior.

Mood swings are also common in dogs with Alzheimer’s; Thus, it is usual for them to be irritated, grumpy or, in many cases, aggressive towards their own masters. Within these behavioral alterations we can also notice manifestations of laziness or laziness, isolating ourselves from their environment.

As a consequence of these changes that are taking place in the animal’s body, it is common for the dog to considerably increase its levels of stress and anxiety.

Diagnosis and treatment of Alzheimer’s in dogs

The proper diagnosis of cognitive dysfunction syndrome is based on the preparation of a correct anamnesis, in which the veterinarian will carry out a compilation of relevant information regarding the animal’s health and the changes that have occurred in its behavior. The clinical history must include a detailed clinical examination and complementary analyzes that allow an accurate diagnosis.

Between the complementary examinations, the veterinary professional will take a blood sample in order to rule out any other primary pathology that may be producing the symptoms observed in the dog. If any other disease is detected that is generating these alterations, the specialist will establish the appropriate treatment for said condition.

Once Alzheimer’s in the animal has been determined, the veterinarian will classify the degree to which it is found to be sick and the treatment to be followed, establishing the control measures to be taken. Currently, this disease has no cure and treatment is aimed at slowing down the progression of the disease and providing the dog with quality of life.

This treatment takes into account the prescription of certain drugs, changes in diet and the implementation of habits and modifications in the behavior of the animal. Generally, the veterinarian orders these therapies to be carried out in parallel and as early as possible.

Both early diagnosis and early implementation of treatment are key factors in improving the animal’s condition, having a favorable impact on the dog’s quality of life.

Tips to help a dog with Alzheimer’s

Some guidelines in dog care can help delay the onset of Alzheimer’s or slow its progression. Among them, care in your diet is essential, with a special diet according to your race and age. It is important that the diet is rich in vitamins and antioxidants.

Providing a calm environment for the dog will help reduce its levels of anxiety and stress, avoiding situations of irritation and violence.

Lastly, it is important to establish a routine in the animal, always feeding it at the same time, taking it out for a walk at the same time of day and repeating the same games in a punctual and routine manner.