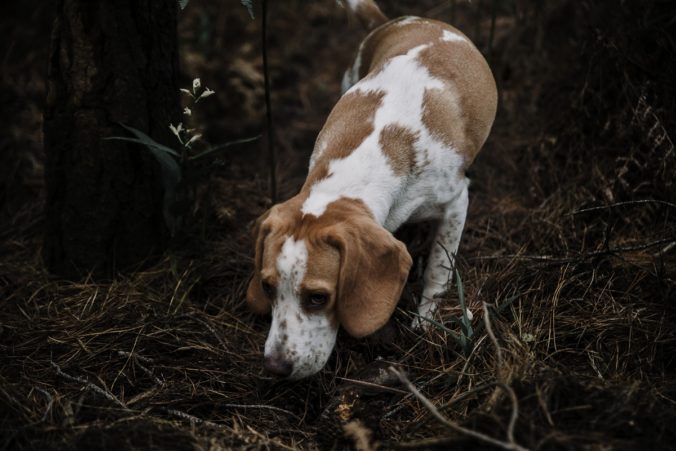 How does a dog’s sense of smell work?

When dogs inhale, they split the air into two streams through their nasal turbinates. The turbinates are elongated, bony-based, mucous formations located on the side wall of the nostrils. One stream of air enters the lungs to allow breathing. The other stream reaches the olfactory membrane, where odour molecules are captured and processed by special cells.

Unlike humans, dogs have an additional olfactory organ that enhances their ability to smell. Jacobsen’s organ, also known as the vomeronasal organ, is a specialised part of the dog’s olfactory apparatus. It is located in the soft tissue of the nasal septum, in the nasal cavity, just above the roof of the mouth.

This organ serves as a secondary olfactory system designed specifically for chemical communication. This is because this organ detects pheromones (body odours), giving the dog its great ability to identify and recognise animals and people.

The nerves of Jacobsen’s organ go directly to the brain and differ from the other nerves in the nose in that they do not respond to common odours. Rather, these nerve cells respond to a variety of substances that often have no odour at all. In other words, they function to detect “imperceptible” odours.

To maximise their ability to smell, dogs increase the speed of their breathing by inhaling and exhaling very quickly, a movement known as “sniffing”. In addition, dogs have a good olfactory memory, which allows them to recognise other dogs, even if they have not seen them for years.

Now that you know how many olfactory receptors dogs have and how their sense of smell works, let’s look at some fun facts about the subject:

How can you stimulate your dog’s sense of smell?

Depending on your dog’s preferences, you can offer him plenty of options to train his sense of smell alone or in company. Something as simple as hiding food, toys, or even hiding around the house, can be very stimulating and fun for your dog. Here are some tips on how to train your dog’s sense of smell:

As you can see, the world of canine olfaction is very interesting and it is well worth stimulating our furry friends. Did you find these tips useful? Did you know all this information about dogs’ sense of smell? We’ll read you in the comments.