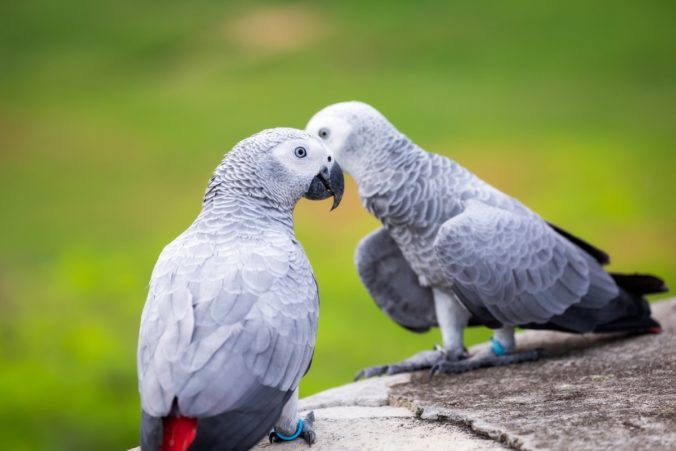 The African gray parrot (Psittacus erithacus), known as the gray parrot or “Yaco”, is an exotic species of parrot characterized by gray plumage that distinguishes it from its species. As its name suggests, it is native to Africa, and for many, it is one of the most beautiful birds in the world.

If you want to know more characteristics about this peculiar type of parrot, or you have one at home, read on and know all kinds of details about its species.

The species of psittacus erithacus, is silver gray. As a general rule, its gray shades become darker on the head and wings, while its belly is lighter. The feathers of its head and trunk are edged in white, giving this bird a scaly appearance on its body.

One of the reasons why the African gray parrot attracts the most attention is for its deep red feathers on the back of its body, making it a very special specimen. Her face is covered in white, and her striking eyes are highlighted with a bluish-gray iris.

Its beak is not completely black: its appearance is rather similar to a metallic dark gray. As for its size, it differs according to sex: in general, males tend to be larger, measuring between 30 and 40 centimeters long, and weighing between 400 and 650 grams, according to the specimen.

What is the natural habitat of the African gray parrot?

African gray parrots, or Yacos, prefer the rainforest, including the savanna, mangroves, and surrounding agricultural land to be able to feed more easily. They are generally largely frugivorous: they eat seeds, nuts, and fruits of multiple genera, having a special preference for the fruit of the palm (Elaies guineensis). In addition, they supplement their diet with flowers, some types of bark and invertebrates (insects and snails).

On many occasions they can be seen descending to the ground to ingest clay or soil, where they also find nutrients and antiparasitic compounds for their body.

The African gray parrot is able to gather in flocks of up to 1,000 birds to rest at night: whenever circumstances allow, they opt for coastal islands, close to glades, to avoid predators.

It is a very sociable bird, which communicates through a variety of somewhat strident vocalizations that serve to organize the congregation, warn of dangers or express anger at rivals.

Its species is usually prey for various types of birds of prey, such as vultures. But monkeys are also a danger in their natural habitat: they often steal the young of the birds or the eggs they find in the nests.

It is known that this type of exotic bird can live up to 20 years in its habitat, and up to 50 in captivity.

The African gray parrot in its culture and as a pet

This parrot is closely linked to its culture and place of origin. They are extremely important for the Nigerian Yoruba people, since their feathers are used in the creation of masks that they use during their festivals or religious events. Even the sounds made by the African gray parrot were adopted by Yoruba folklore to warn of dangers for the people.

It is a very popular animal among parrot lovers, so there are many captive breeding programs for those who are interested in keeping and caring for them as pets at home.

The species is intelligent, and due to their social nature, they can be educated and have a good coexistence within the home. In your care, you must also include a balanced diet of seeds and fresh food.

Stress in these birds can lead to plucking episodes, a very damaging type of neurosis that must be treated by a veterinary specialist in exotic birds.

As for the cage, it must be large enough to guarantee the movement that these birds need. You should place it in a quiet place, where there are no drafts and in moderate direct sunlight, and of course, away from other animals. You can put inside some toys with which he will learn to entertain himself, and branches on which he can perch or just use to bite.

Trained African gray parrots can get out of the cage to fly outside – this practice will keep them in good physical and mental health.

In addition, it is a species capable of imitating human words and voices, so you can entertain and stimulate it by teaching it countless expressions.

The African gray parrot can suffer certain pathologies on a frequent basis, among which the following stand out:

As you can see, African gray parrots need attention and care so that they can live healthy and happy, so as the owner, you must be responsible and put sufficient resources and means to avoid these and other pathologies, as well as keep the bird happy.

Is it a good idea to have a pet with a newborn?